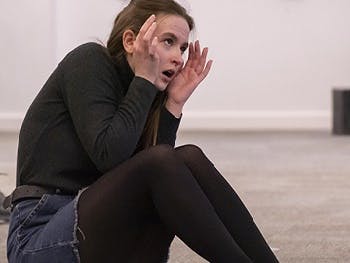 Vocal and orchestral students from the acclaimed UK music school will perform a semi-staged version of Coraline, an opera based on Neil Gaiman’s children’s novella, in the Conservatoire’s 493-capacity Bradshaw Hall on Friday 26 and Saturday 27 March.

Fashion, Visual Communication and Stage Management students and alumni from Birmingham City University, of which Royal Birmingham Conservatoire is a part, have lent their skills to the project, making bespoke costumes, documenting preparation and rehearsals, and overseeing the logistics of the opera.

It will be one of the first opportunities for vocal studies and orchestral students to perform live in the space since the pandemic began a year ago, and will allow the 30-strong multi-disciplinary group to learn practical skills and experience in a working concert hall despite the current restrictions.

Covid-secure measures taken by staff in advance of rehearsals and two performances include a series of risk assessments, employing a taped grid on stage to ensure two metre distancing for performers and musicians, a chamber orchestra comprising 15 members, and with no physical contact between individuals during the opera.

Specialist Visiting Tutor, Daisy Evans, director and founder of the critically-acclaimed Silent Opera, is working alongside staff and students from Birmingham City University to deliver the project, stage managed by Rebecca Critch, a 2016 graduate of the Stage Management course at Royal Birmingham Conservatoire and experienced opera and classical music concert stage manager.

The children’s novella Coraline, written by English author Neil Gaiman, scooped a number of awards following its publication in 2002. The story of a girl who moves into a new house, finds a door into a parallel universe and meets her Other Mother and Other Father who’ll give her anything she wants if she exchanges her eyes for buttons. In 2009, Coraline was adapted in to a stop-motion animated fantasy film, voiced by Dakota Fanning. Turnage’s opera, based on the book, was premiered at London’s Barbican in 2018.

Speaking ahead of the performance, Paul said, “I am enormously proud of the students and creative team behind this exciting production of Coraline. Not only are we the first conservatoire to stage this complex and colourful opera, but we have created something of which BCU can be rightly proud in the face of the enormous challenges to live performance posed by the pandemic. I would like to thank staff at RBC and at BCU more widely for their support of this production which surely places us at the leading edge of what is currently possible for live opera performance in the UK. The fact that, on top of all of this, we’ve been able to make this a truly cross-faculty project reflects the desire for students across Arts, Design & Media to create projects of real impact which must surely rival anything to be found at other conservatoires across the UK.”

Coraline, performed by Royal Birmingham Conservatoire vocal and music studies, will be recorded for broadcast at a later date.