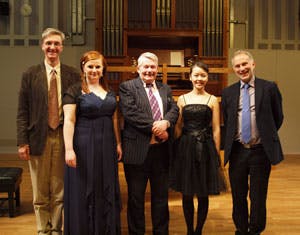 The winners of the 2011 Leamington Music Prize have been announced. The Prize of £1000 will be shared between the mezzo soprano Anna Jeffers and pianist Di Wu.

Anna Jeffers comes from North Wales and, in her period of study at the Conservatoire, won the Reginald Vincent Lieder Prize and the Gordon Clinton English Song Prize. She has sung in a number of operas, at the Conservatoire and British Youth Opera, and also in Madam Butterfly with Longborough Festival Opera.

Di Wu is from China, where she attended the Wuhan Conservatory and Xinghai Conservatory. She has been a prize winner in numerous competitions in China including the Toyama Asian Youth Piano Competition in Hong Kong. She has also worked in Guangzhou Opera House on Puccini’s Turandot.

Prof David Saint said, “The Leamington Music Prize offers fantastic professional development support to our students, as well as an opportunity to showcase their talents. The Prize provides not only a generous award, but also useful feedback from one of the region’s most important music promoters. We are delighted to be working with Leamington Music in this way.”

Richard Phillips, Festival Director adds, “It gets harder each year to select winners for this Leamington Music Prize. This is the third year and all seven entrants gave listeners a lot of pleasure and showed encouraging talent.”

The previous winners of the Leamington Music Prize have been in 2009, the Chinese pianist Chen Chen and in 2010 the Russian pianist Tatiana Dardykina and the British clarinettist Jack McNeill (joint winners).

Besides the prize money, the winners are given a concert in the Leamington Music winter season and it is hoped that a date, probably in November, can be announced in the near future, the venue again being the Bridge House Theatre in Warwick.

Leamington Music is one of the major promoters of chamber music and early music in the Midlands. It promotes a winter season of over 20 concerts, its flagship event, the Leamington Music Festival Weekend over the first Bank Holiday weekend in May and a further series of concerts in early summer.