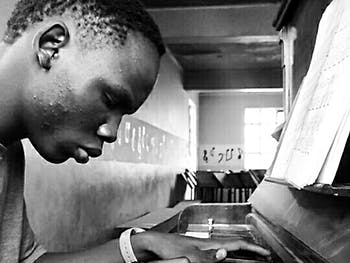 Teddy Otieno, an aspiring pianist from Kenya, has launched a crowdfunding campaign to be the first Kenyan to study piano in Europe.

Teddy, who is from Nairobi, recently received an offer to study at Royal Birmingham Conservatoire (RBC) and has already secured £83,000 in support from RBC, Royal Birmingham Conservatoire Association (RBCA) and external funders. He has now launched a crowdfunding campaign in a bid to raise the remaining £37,000 to cover his fees and living expenses.

As a self-taught musician, Teddy is excited at the prospect of learning the piano professionally at the conservatoire and hopes to inspire the next generation of Kenyan pianists to do the same.

Teddy said: “I would really like someday to be invited to perform in Europe just like the professional pianists who come to Kenya to perform have inspired me to chase my dreams. I believe studying at RBC would enable me to achieve this and I am committed to working hard on my technique and training.

“Once I have graduated, I would like to share my knowledge of and passion for the piano, increase awareness of classical music within my community, and change the narrative in Kenya by supporting other young pianists to realise their ambitions too.”

The money raised is being held in trust by the Royal Birmingham Conservatoire, to keep it safe for each of the four years of the degree.

As a thank you, donors will be invited to a concert in July, livestreamed from Nairobi. There will also be a follow-up concert after each year to keep donors updated on Teddy’s progress.