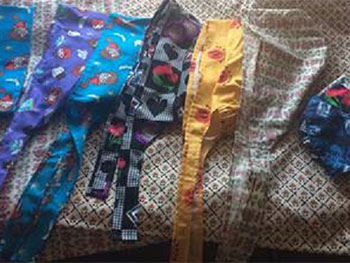 Royal Birmingham Conservatoire Acting’s Head of Wardrobe has been putting her skills into action by making various items of scrubs for the NHS during lockdown.

Jacki Cottom was inspired to do her bit to help out when she saw a post on Facebook from nurse Ashleigh Linsell, who had started making scrubs for herself and her friends because of the shortage of PPE equipment. This has since snowballed into a nationwide effort with ‘For the Love of Scrubs’ groups around the country.

Jacki said: “I’m a member of the Shropshire branch, but there are groups located all over the country, and thousands of sewers young and old of all sewing abilities have taken to their sewing machines. It’s amazing and humbling to see.

“I’ve been using my stash of fabrics, which are quite funky – Harry Potter, skulls, pirates and other colourful prints – these are great for the smaller items, but for a set of scrubs it takes about three meters of fabric, so I put out a call for fabric, cotton sheeting, etc., on my local online community group and I’ve been swamped with offers of fabric and donations left outside my gate.

“I donate to individuals or groups; usually the sub group distributes to the various NHS trusts, but I’ve responded to individual cries for helps too. I mostly concentrate on smaller items like scrub bags, which are basic drawstring bags that the NHS worker can pop all of their uniform into, including shoes, and put it through a 60 degree wash.

“I also make masks, scrub hats and ear protectors, which are basically rectangles of fabric with buttons attached on either end; the idea is that the mask’s elastic hooks over the buttons, rather than the wearer’s ears because, after wearing masks all day, the wearer’s ears are getting rather sore.”

Anyone who would like to get involved in making scrubs like Jacki can check out the For the Love of Scrubs group on Facebook, or search on there for a local group.