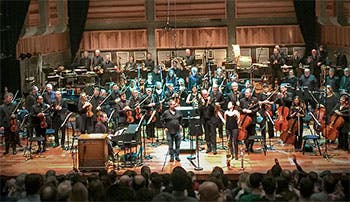 The album features four unique and idiosyncratic works that have been composed for large orchestras over a period of 20 years.

The title track ‘Hawaii Hawaii Hawaii’, which was recently nominated for a high-profile Ivors Composer Award, features Trish Clowes on saxophone with the BBC Concert Orchestra, conducted by Ben Palmer. This piece was commissioned by the BBC and premiered last year.

RBC alumna Trish Clowes, who completed her PhD at RBC earlier this year, was described in The Guardian as “one of the most agile and original jugglers of improv and adventurous composition to have appeared in the UK in recent times”.

Of the album, The Sunday Times said: “This showcase of four works by Cutler culminates in the titular saxophone concerto, a live recording by the BBCCO. Inspired by a dystopian David Mitchell fiction, the score has graphic immediacy and exploits the inevitable jazz connotations of the solo instrument. Raw, raucous Dutch minimalism is similarly made personal in the other pieces, all cast for this Dutch ensemble.”

Joe’s work is often described as post-genre and this new recording is a powerful compositional statement that references a number of influences ranging from Morton Feldman to Ben Webster, or Brian Eno to Tōru Takemitsu, but refracted through the composer’s lens.

The other three works on the album derive from Cutler’s 20-year relationship with the Netherlands-based collective, Orkest de Ereprijs.