Graduate finds himself back at BSA - in a role reversal. 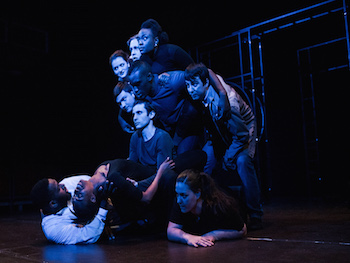 Graduate Corey Campbell has found himself back at the Birmingham School of Acting (BSA) to share a powerful new production he is creating. He now returns after only three years in an almost role reversal.

“It is an absolute pleasure and privilege to have the opportunity to work with our very talented graduates. It feels a very unique position to be working not only with actors but a writer and company who are all BSA graduates. It’s very exciting – and a bit daunting!” says Danièle Sanderson, the Deputy Head of School and Course Director for BSA.

Corey is collaborating with Danièle and BSA alumni Camilla Whitehill, who is also an award-winning writer.

“Freeman, which is the show that Danièle Sanderson, Camilla Whitehill and I are collaboratively working on, is a production that was birthed out of the research I was doing into the link between mental health and the African Caribbean community," says Corey.

"Whilst researching, and actively facilitating workshops, I came across the expression 'black rage' which, when explained, became very offensive to me. I soon began to make a link between this fairly new coined phrase and the growing concern of the mental stability of young black men and women, and of course the justice system.

"I then heard the powerful story of William Freeman and instantly knew I needed that to be our next production. Danièle Sanderson has always supported the company on a personal level, so have the school. With talents like Camilla Whitehill among many other graduates, I knew I did not need to look any further than Birmingham School of Acting to make this work.

"More recently for these projects we have been given rehearsal space, which is a big weight off my shoulders as I fund the shows most of the time myself, but that was confirmed last week. Most of my shows and workshops use BSA graduates. I use it as a kind of hub for the emerging talent, as I know they are local and have been trained in the same way. It's important to say this project in its research and development stage was ACE (Arts Council England) funded," says Corey.

Freeman applies physical theatre to interrogate the tension between mental health and the justice system. The production is based on a true story about a black slave, William Freeman, in the 19th Century who was put on trial in New York. The case was the first one to raise ‘insanity’ as a defence.

“I’m very excited to be working on a topic that is so huge and prescient - wrestling with big themes like race, mental health, and the prison system. It’s also lovely to be working with Corey, and with Daniele Sanderson. I greatly enjoyed my time at BSA and think we’re going to make something very interesting together!” says Camilla.

The production is due to run from September 29 to October 6 2016 at Belgrade Theatre Coventry.