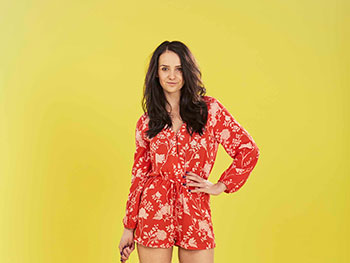 A graduate of Birmingham City University’s Royal Birmingham Conservatoire has returned to her alma mater and previewed her award-winning stand up show to students and staff ahead of a run at the Edinburgh Festival Fringe.

Gabby Killick is one of the new wave of female stand-up comedians taking Europe by storm, and she performed her ‘Girlfriend From Hell’ tour before taking it to Edinburgh, where it is scheduled to play for a month as part of the Underbelly umbrella in George Square.

Gabby treated students and staff at Birmingham City University to the exclusive show on Monday 18 June in the Conservatoire’s Eastside Jazz Club. However, the wider public will get the chance to enjoy her act ahead of her Scotland stint when she appears at Digbeth Dining Club’s new Midnight Cabaret event, taking place in Mama Roux’s at 10pm on Saturday 14 July.

‘Girlfriend From Hell’ gives a unique insight into the mindset of today’s girls about town. From useful advice on when it’s OK to stalk your boyfriend, to guidance on what to do when you lose your skirt in a club, the show offers something for everyone.

Gabrielle – better known as Gabby – has been developing her unique blend of comedy for the past three years and has played at venues all over Europe including in Barcelona, Hamburg and Vienna.

As her audience has grown, so has her position as one of the most authentic voices of her generation, saying things that many others would only dare think.

Gabrielle took her first one woman show to Edinburgh in 2015 when she was still an undergraduate student at Royal Birmingham Conservatoire (formerly Birmingham School of Acting).

Since graduating, she has won the title of Birmingham’s Best Newcomer at the Birmingham Festival and has just finished shooting her first independent film, ‘No Fruit At The Bottom’.

“It’s great to see more and more women getting on the stand up circuit and giving the men a run for their money. Lots of girls are coming to comedy clubs and it is important that they get to see material that they can relate to.

I’m really looking forward to performing back in Birmingham, that's where it all began for me. I had my first gig there, went to drama school there, won awards there and shot my first feature film there.

Earlier this year, the Funny Women organisation named ‘Girlfriend From Hell’ as one of the UK’s top three female-led comedy shows. 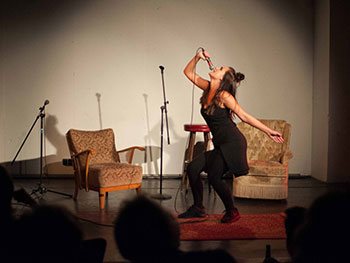 “It’s great to see Gabby bring this show back to Royal Birmingham Conservatoire after touring with it in the UK and across Europe.

“She started developing the show and trying out her original material whilst a student here in 2015, so it’s great that she is bringing a fully realised version back to where it all began before heading off to the Edinburgh Festival Fringe.”

As well as performing ‘Girlfriend From Hell’ at Mama Roux’s, Gabby will be seen elsewhere in Birmingham this July, when she reprises her award-winning role in ‘The Morning After’ at The Blue Orange Theatre in the Jewellery Quarter.