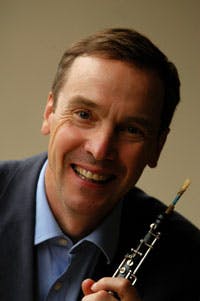 This special concert punctuates George Caird’s career as a leading light in conservatoire education by celebrating his talents as a distinguished musician. He will feature as the soloist in the much-loved Strauss Oboe Concerto, accompanied by the Conservatoire’s acclaimed Symphony Orchestra, under the baton of Lionel Friend. As an extra accolade, he will be made the 100 Fellow of Birmingham Conservatoire during this event.

Having begun his academic career at the Royal Academy of Music, George Caird was appointed Principal of Birmingham Conservatoire in 1993. In his opening address, he said “Now in the early days of the National Curriculum I want to explore ways in which the conservatoires can respond to the co-ordinated development of music education”. Seventeen years later, the Conservatoire’s BMus (Hons) degree is still unique in including the option of an integrated PGCE qualification. The Conservatoire also introduced a BMus (Hons) in Jazz under George Caird’s guidance (in 1999), and is now acknowledged as a leader in jazz education and training.

Under George Caird’s leadership, the Conservatoire has grown to be internationally respected. Its recruitment of overseas students has grown dramatically, with 36 countries represented this year (23 percent of the student population). Today, the overall number of students at the Conservatoire also stands at an all-time high – over 650 undergraduate, postgraduate and research students and over 200 Junior Conservatoire students.

The semi-finals of the BBC Young Musician of the Year were also held at the Conservatoire during 1993, with George having sat on the adjudication panel for this prestigious event during his career, along with many other esteemed competitions throughout his principalship.

A commitment to courageous repertoire and original thinking has distinguished George Caird’s years, illustrated by projects such as opera commission Dee; the New Generation Arts Festival; composer celebration ‘Boulez in Birmingham’; and pioneering music and media project And Now, The News with Julian Lloyd Webber and the BBC. Embracing early, world and contemporary musics, as well as the classical cannon, the Conservatoire has become a strong local and regional resource, encouraging groups such as Aston Performing Arts Academy.

A Facebook page is available, where past and present students, staff and anyone who has worked with or known George, can post photos, messages and share fond memories they may have of George by visiting www.bcu.ac.uk/georgecaird.

‘Birmingham Conservatoire Symphony Orchestra: Farewell to George Caird’ takes place at 7.30pm on Thursday 16 December 2010 at the Town Hall, Birmingham. Tickets, priced at £12 (£10), £3 for students (plus a £2 fee per transaction for phone and online bookings), can be purchased directly from Town Hall Box Office by telephoning 0121 780 3333 or by visiting www.thsh.co.uk