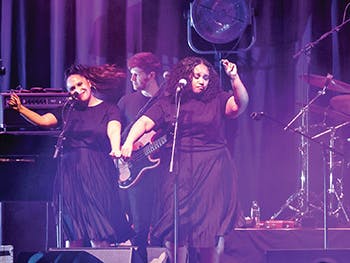 A new report exploring gender politics and inequality in British jazz, produced in conjunction with Cheltenham Jazz Festival and Keychange, has been welcomed by industry following coverage from BBC Radio 4’s Woman’s Hour and The Guardian.

The research, carried out by Dr Sarah Raine, former Research Fellow at the Birmingham Centre for Media and Cultural Research housed at the School of Media, is the outcome of a M3C/AHRC funded Fellowship undertaken at BCU.

The report takes an in-depth look at the Keychange quota for jazz festivals, provides insight into the experience of women musicians on the UK jazz scene, and offers recommendations to other music festivals interested in becoming Keychange pledgees.

Emily Jones, the then-Head of Programming and Festival Manager at the Cheltenham Jazz Festival, acted as the industry partner for the project. Ten women musicians who performed at the 2019 festival were interviewed and their anonymised experiences included in this report and subsequent academic publications.

Gender data throughout Cheltenham Jazz Festival’s 23-year history, which shines a light on the continued underrepresentation of women jazz musicians and a comparative lack of instrumentalists, is also encompassed within the research.

Data from the Glasgow, Hull and Manchester Jazz Festivals was also gathered for the purpose of this project, and also point to similar issues with the dominant interpretation of Keychange 50/50 (one woman on stage) and the UK jazz scene more generally.

This report also includes a response on the project findings from Keychange Project Manager, Maxie Gedge.

This report is a culmination of collaborative work between academia and industry. It was funded and supported by M3C (Midlands3Cities) and AHRC (Arts and Humanities Research Council) as part of their Creative Economy Engagement Fellowship scheme.

A full PDF copy of the report can be downloaded here.