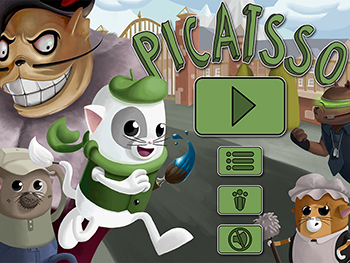 Move over Angry Birds and Candy Crush – students from Birmingham City University are hoping that we will all soon be hooked on their new gaming apps.

God Send and Picatsso are the two iPad apps developed by two student teams as part of their postgraduate course and will be presented to a panel of industry experts this week.

God Send takes place in the world of Ancient Greek mythology. Following an accident with a chariot on Mount Olympus that has scattered the gods' mail, Hermes, the messenger of the gods, must find and recover all the lost post. Along the way, players face hideous beasts such as minotaurs, gorgons and cyclopses, before crossing the dangerous terrain of the Underworld.

Picatsso centres on an artistic feline who finds all his artwork has been stolen by the villainous canine, Vincent van Dog, and taken to his mansion. Players must run, jump and paint their way to justice, as they help Picatsso reclaim his pictures, all while avoiding the security dogs that lurk in every corner of Vincent’s home.

The brief both teams were given was to create a video game in two months that reimagined Manic Miner. The 1983 title is often cited as a pioneer within the platform genre, where players guide an avatar to jump between suspended surfaces and over obstacles.

The programmers, designers, artists and producers of God Send and Picatsso are all studying at Birmingham City University's New Technology Institute (NTI) on the Gamer Camp course. Meanwhile, in-house talent has contributed to other aspects of the apps, with music and sound effects being provided by students from Birmingham Conservatoire and Birmingham School of Acting undergraduates voiced all the characters.

On Tuesday 8 December the two teams will present their respective apps to representatives from top Midlands games companies Calvino Noir, Codemasters, Rare, Lab42 and Pixel Toys. As well as receiving useful feedback from industry executives who are already making commercially successful games for mobile phones and tablets, students are also hoping that their skills will impress the companies as they look to secure internships and eventual employment.

Following a similar exercise last year, around half of the students involved went on to enjoy placements with the video games companies they pitched to. The Gamer Camp course as a whole has a 70 per cent employment rate within the games industry.

This project and the Gamer Camp course take an innovative and multi-disciplinary approach in developing new talent for the video games industry. The students have used their skills in art, programming and business to create these fantastic games working as part of a full-time development team.
Oliver Williams, NTI Director, Associate Professor

“This project and the Gamer Camp course take an innovative and multi-disciplinary approach in developing new talent for the video games industry. The students have used their skills in art, programming and business to create these fantastic games working as part of a full-time development team.”

“Video gamers are inherently drawn to problem solving and this development project in itself was a great puzzle, taking a whole creative team to solve. The end result is in sight and it is shaping up not just to be just an academic exercise, but it will produce an actual believable and fun product that I would want to play.”

The students have also had industry input during the development of their apps too, with bi-monthly feedback given from staff at software company Exient.

Jenn Rivas, Producer at Exient said: “They’ve shown great teamwork and aptitude for embracing feedback and iterating on their work that can be tough even for the most seasoned developer. The students this year have great potential and I can’t wait to be working with some of them again as someone on my development team.”

Following the industry event this week, the students hope to offer both games as a free download available via the iOS App Store in January.

The students’ next project will see them develop an original game for the PlayStation 4 games console. Birmingham City University is one of only five institutions in Europe to have had access to the device’s development tools at launch in 2013, even before some established software companies.