From Beijing to the Royal Albert Hall 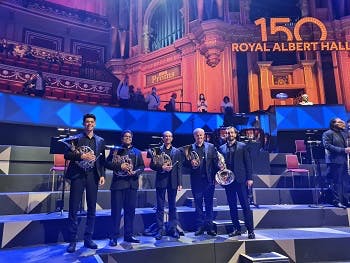 Q. What did you do after graduation?

After graduation in 2018, I worked for a year in Beijing with Orchestra Academia China as a 2nd and 4th Horn. Our principal conductor En Shao came to RBC in 2019 and, after a quick audition, offered me a job on the spot.

The orchestra is made up mainly of Chinese nationals, but has more foreigners in it than most Chinese orchestras. I made some great friends, such as Nikola Ciric, Principal of the Belgrade Philharmonic in Serbia, and had some great musical development such as studio recordings for movies and the CCTV (their BBC). The culture shock wasn’t too big, although it was interesting to see how nobody spoke English in the slightest, so I had to pick up Chinese as quickly as possible.

Q. How did the pandemic impact you?

The pandemic has kept me away from my job in Beijing since March 2020, as it became very difficult to enter China as a foreigner. Although it was difficult to only be able to complete one of the two years of my contract, I did my best to make as many opportunities for myself in the UK during the pandemic, such as Zoom auditions, and playing in outdoor spaces with friends when possible.

Although the pandemic changed the trajectory of my career, it allowed me to find a lot of the enjoyment in music again, that often gets lost when not making music for the fun of it.

Q. Have you been working with other musicians?

Recently, I have mainly been working with the Chineke! Orchestra in London. When I first started working with them I hadn’t played in an ensemble for about a year due to the pandemic, but rehearsing with so many switched-on musicians allowed me to slip right back into what I know. In this orchestra, I often work with RBC alumnus Anton Clarke (clarinet).

Q. Have there been any notable performances?

Most recently, performing at the BBC Proms with the Chineke! Orchestra. Growing up in East London, I would often go to watch the Proms, and a dream was born to one day play in a prom myself. There were also a few notable performances in China such as working alongside the Philadelphia Orchestra in an international piano competition, and playing Chinese Opera tunes for Kaifeng’s 37th Annual Chrysanthemum Festival.

Q. What are your future plans?

Currently I am living, working and teaching in London. I may return to Beijing when foreigners are more easily allowed to return, but until then, I’m enjoying the work that the London scene can offer.

Ben can be contacted on garalnick@outlook.com