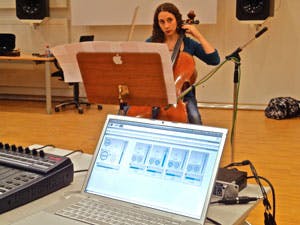 A pioneering piece of music software has been developed by researchers at Birmingham Conservatoire, part of Birmingham City University.

Integra Live is an open source program which allows musicians, composers, producers and DJs to transform music as it is being performed live and can be downloaded for free from www.integralive.org.

The software has been designed to make working with electronic music as intuitive as possible and is the result of three years effort. It works by allowing the user to transform the sounds with a computer and obtain immediate results, meaning that a musician can react to a changing aural landscape and make their performance truly 'live'. Integra Live's capabilities can be applied to all kinds of sound, from miked-up acoustic instruments through to the synths of electronic dance music, and the developers are actively encouraging anyone with an interest in cutting-edge creativity to try it out.

The program also allows classic live electronic works from the 1970s and 1980s to be saved for future generations. Many of these compositions require specific pieces of technology that are now obsolete - Integra Live solves this problem by providing software-based versions of their capabilities, which can be used by anyone, with no need for the original hardware.

Students from the Conservatoire have already started incorporating the program into their compositions - a number of which will be premiered at the Integra Festival next week (27 Sept - 01 Oct) in Copenhagen. The event will also feature world premieres of four new large-scale works composed using Integra Live.

Lamberto Coccioli, Project Manager and Head of Music Technology at Birmingham Conservatoire said: "We have commissioned composers, organised more than thirty performances and transferred classic pieces from their original technology to more modern platforms. In doing this we want to inspire people to become involved in live electronic music and demonstrate the vitality of the art form. We aim to provide the next generation of electronic musicians with friendly tools to explore new methods of creating music and we hope they will share their pieces with us using the Integra Live platform".

Integra is a €1.9M project funded by the EU Culture programme.