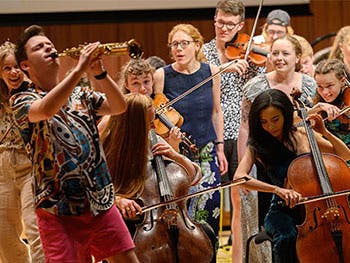 The UK's largest folk band, the Conservatoire Folk Ensemble- formed at Royal Birmingham Conservatoire 25 years ago - performed at BCU’s 2025 Strategy celebration in the Bradshaw Hall on Tuesday 14 June. The event was part of an extensive events programme being hosted up until November, marking the work being achieved in the University’s ambitious strategy.

Formed by fiddle player and arranger Joe Broughton, the Conservatoire Folk Ensemble has established a formidable reputation across the country. Creating energetic and powerful shows, the band has played everywhere from the Royal Albert Hall to Birmingham New Street Railway Station. The personal influences of each and every band member shapes their music, which reflects the rich cultural heritage of the group.

Master of Ceremonies Marcus Ryder MBE, of BCU’s Sir Lenny Henry Centre for Media Diversity, introduced the almost 70-strong folk act as the final musical act of the event. Following the high-energy concert, Marcus called back percussionist Justin from the band – as the audience chanted his name in appreciation – for a round of applause for his lively performance.

Get a taster of their performance with this gallery of images.

The event also included a performance by world-leading percussion ensemble Maraca2, whose members Jason Huxtable and Tim Palmer are RBC alumni. They were joined by friends and RBC percussion students, and performed a Maraca2 commission called Espiritu Libre by Stephen Whibley.

During the event, attendees got an exclusive peek of a film featuring BCU Chancellor Sir Lenny Henry, which brought to life BCU's strategy and mission to be the University for Birmingham and enable transformation. Watch the video here.

Guests were also invited to the University’s new STEAMhouse facility for informal drinks, canapes, tours of the building, and a presentation from Mayor of the West Midlands Andy Street. Ambient music was provided by RBC students Neil McCracken, Benjamin Love, and Ethan Wood.