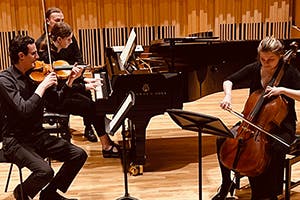 The Félicité Piano Trio, made up of three RBC students, have been awarded the 2022 Leamington Music Prize. Seven groups participated in the competition for the prize, which was first awarded in 2009.

The Félicité Piano Trio, which was formed in 2018, played works by Lili Boulanger and Clara Schumann.

The Trio is led by postgraduate student Ricardo Brown Roger, who was born in Valencia in Spain, where he started his studies on the violin. He then moved to the Royal College of Music in London and then went on to study at RBC.

The cellist in the Trio, fourth-year student Lucy Samuels, began her studies aged seven with the Berkshire Maestro Trust. Earlier this year, she was awarded the position of inaugural Student-in-Residence with the Royal Ballet Sinfonia.

The Trio’s pianist,Lucy Eccleshall, is passionate about education and teaching piano, and will have a piano tutor book for beginners published this summer.

Final-year student Lucy said: “We are extremely proud and honoured to have been awarded the Leamington Music Prize, we would like to thank Leamington Music for their generous support. We are very much looking forward to performing a programme of music that we are passionate about in the prize-winner’s concert later this year.”