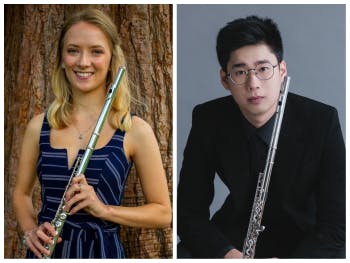 The event, held on Zoom on 28 February, welcomed players from around the world, including from Europe, the USA and South Korea, and attracted over 200 viewers. It was hosted by BFS Chair Lisa Nelsen, and each player had the opportunity to tell the audience a bit about themselves and why they chose their piece.

Japheth also received the most votes and won the audience prize in the Young Artist category.

Emily said: "I am so thrilled to have been awarded the special award for the best low flute performance. I entered the competition on alto flute to challenge my alto playing as it is not something I have performed solo before, so winning the special award was such a pleasant surprise. This Fantasia for alto flute was inspired by the Walpurgis witches' dance, a tradition found in the Harz mountain region. I really enjoyed playing it and telling a story through the music."

Japheth added: "I'm really honoured to have been awarded best piccolo performance and audience vote prizes. I am particularly grateful to my teacher Andrew Lane who inspired me to join the competition on piccolo, and to BFS Chair Lisa Nelsen for making this competition such a friendly one."