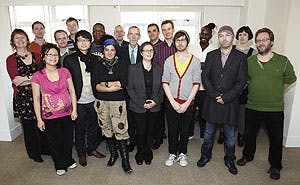 PRS for Music Foundation has announced that Birmingham Conservatoire composers will contribute four of the 20 outstanding pieces of new music which will feature centre stage of the London 2012 Cultural Olympiad as London hosts the Olympic and Paralympic Games. The twenty works commissioned for New Music 20x12 each last 12 minutes and offer a snapshot of the quality and diversity of new music in the UK. Each piece will be broadcast by BBC Radio 3 and tour the UK – ensuring as many people as possible have the opportunity to enjoy excellent new music as part of the 2012 celebrations.

The works selected for New Music 20x12 cover a wide range of genres, reflecting the diversity and richness of musical life in the UK - from contemporary classical, folk and opera in Scotland and Northern Ireland to bell ringing, beatboxing, jazz and music for brass band in England and Wales.

Inspired by the dynamism of Olympic and Paralympic sports, the passion of human endeavour so central to the Games, and the once in a lifetime opportunity of creating a musical work which contributes to a global celebration, these commissions are full of the energy, hope and excitement that will emanate from across the Cultural Olympiad and the Games themselves.

Birmingham Conservatoire, part of Birmingham City University, is particularly delighted about the result of the commission, as one fifth of the composers chosen come from its Composition Department; this is the largest representation by far from any of the nine UK conservatoires. Dr Joe Cutler, Head of Composition at Birmingham Conservatoire, and one of the 20 composers to receive this prestigious commission, said: "It is very exciting to have four members of our team – myself, Michael Wolters, Howard Skempton and Richard Causton – contributing to such an important, world-class event. That four such diverse composition projects have been selected from composers working within the same institution really shows the range and profile of the work that goes on at Birmingham Conservatoire. We're delighted to have this acknowledged in such a public way, which reflects so positively on Birmingham."

“The panel was impressed by the quality and range of the UK wide applications and reluctantly rejected a number of distinctive project proposals. However, 20x12 means just that and only 20 ideas could be approved for funding. Those selected were considered to be outstanding and represented a range of compositional output by their wide variety of genres and styles. These pieces will form a vibrant and exciting celebration of British composition in 2012 and help to reflect the Olympic and Paralympic values through their creative excellence and inspirational ideas.”

Vanessa Reed, Executive Director of the PRS for Music Foundation, said: “We are delighted that so many talented music creators and organisations were inspired to apply to New Music 20x12, a fantastic initiative that will see the UK’s music community leaving its legacy as part of the London 2012 Cultural Olympiad. The chosen 20 collaborations offer a snapshot of the UK’s fantastically rich and varied new music scene and we are proud to support their contribution to this unique, international celebration.”

Alan Davey, Chief Executive of Arts Council England, said: “The exciting range of these compositions sums up why the UK is a world leader in culture. Not only does London 2012 offer an unprecedented moment to showcase our talent on the world stage, it will also demonstrate the power of collaboration. New partnerships are forming across the UK to deliver programmes such as this, encouraging innovation and engagement, which will leave a lasting legacy long beyond 2012. Congratulations to each of the chosen 20 – I can’t wait to hear what they come up with.”

New Music 20x12 was initiated by Jillian Barker and David Cohen and will be delivered by the PRS for Music Foundation in partnership with the BBC, LOCOG (the London Organising Committee of the Olympic and Paralympic Games) and Sound and Music.

New Music 20x12 is generously supported by committed patrons and funders from across the UK including the Arts Councils of England, Wales and Northern Ireland and Creative Scotland. For more information about New Music 20x12 see www.prsformusicfoundation.com