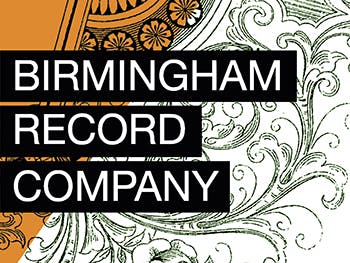 Birmingham Record Company (BRC) was established by Royal Birmingham Conservatoire in 2013 to promote the bold and exciting new music being created by our Composition Department.

Its mission is to present eclectic new releases by artists who challenge, innovate and transform ideas of music today, and celebrate off-beat work that sits between genres. Alongside 12-minute micro-operas and Country-and-Western piano quintets, listeners are likely to find music structured around famous football matches, recordings of 1920s mechanical dancehall organs, and story-telling in yoga positions.

Birmingham Record Company has got off to a flying start. Further releases, including Seán Clancy’s guitar quartet, Forty-Five Minutes of Music on the Subject of Football, performed by Ensemble KROCK, and a portrait disc of Ed Bennett with Decibel, show a catalogue – and maybe even a music scene – in rude health.
Stephen Graham – TEMPO Quarterly Review of New Music

In early 2019, BRC signed a distribution deal with the renowned NMC Recordings, meaning that NMC will re-release the BRC back-catalogue through their own distribution networks. This will broaden the audience and shine a spotlight on the innovative work taking place at the Conservatoire. In addition, the relationship with NMC has provided professional support to BRC in developing the quality of the younger label. Since the agreement was signed, BRC now has its own dedicated section of the NMC website.

2 May 2019 will see an all-day event take place at the Conservatoire to celebrate the partnership with NMC, featuring concerts and talks from artists on the label and giving audiences an exclusive preview of the new music that will be released over the coming months.

Coming up there will be a new release in May 2019 of a multifaceted concert-event Catalogue d'Emojis, and a further new release in October called Voyage Foog, Phat Moog exploring the fascinating electro-acoustic world of the world-famous Moog analogue synthesiser. In addition to this a remarkable series of singles will be released throughout the year from Conservatoire alumni and friends.

Whilst the label has initially focused on the music of Conservatoire staff members, the goal is to open the label to both graduates and students who have the ambition to release challenging and high-quality creative performances into the wider world. By doing so, BRC will shine a light on one of the most dynamic and original music scenes in the UK today.