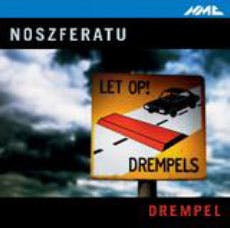 Noszferatu's long-awaited debut album, Drempel, will be released on the NMC label on 18 October. The London launch will take place on 16 November at the Forge, Camden, as part of the London Jazz Festival, followed by a Birmingham launch on 22 November at Birmingham Conservatoire, as part of the Frontiers contemporary music series.

Founded in 2000, Noszferatu is a music collective, which works across a wide range of genres including contemporary classical, jazz, tango, pop, experimental music and theatre. The group gave its debut concert at Oxford Contemporary Music in 2001 and has since performed at the Huddersfield Contemporary Music Festival, Cheltenham Festival, the Warehouse (London) and all over the UK. Noszferatu has also given concerts in Italy and the Netherlands and has recorded regularly for BBC Radio 3.

Noszferatu includes some of the UK's best experimental composers and Drempel (part of the phrase ‘Let op! Drempels’ which means ‘Mind the ramp’ in Dutch) represents a cross-section of their repertoire. Tracks range from the haunting minimalism of Howard Skempton's In Tandem and Andrew Poppy's How the Hammer Felt to the jazz-fuelled improvisation of Finn Peters' The Horses Screamed and the manic sampling of Dave Price's Lee's Game, and taking in music by Joe Cutler, Geoff Hannan, Paul Newland and Jonathan Powell along the way.

All of the musicians involved have a connection to Birmingham Conservatoire. Joe Cutler is Head of Composition, while Howard Skempton is a composition tutor and Dave Price, Finn Peters, Jonathan Powell and Andrew Poppy all work as regular specialist lecturers. Geoff Hannan and Paul Newland are both former winners of the Conservatoire’s New Millennium Composition Competition and Ivo De Greef is an alumnus of the institution.

Drempel was recorded in the Conservatoire’s renowned Adrian Boult Hall and has been produced by Simon Hall, Assistant Head of Music Technology. Consequently, Birmingham Conservatoire / Birmingham City University was pleased to support the production of Drempel as part of its ongoing commitment to new music research.

Joe Cutler writes: “Everyone involved in Noszferatu is very excited about this disc, which features music written for the group over the last 10 years. When the collective was formed, we found very little existing repertoire for saxophone, percussion and piano, so we had to commission work from composers whose music we were particularly interested in. Since that time we’ve commissioned over 30 pieces for the ensemble from many of this country’s leading composers, and we recently had a piece written for us by the renowned American composer Frederic Rzewski, which we’ll be premiering at this year’s Huddersfield Contemporary Music Festival.

“That partly explains why it’s taken so long to release a disc! Secondly, all the members of the group are very busy with other creative activities. (Dave Price spent three years touring the US with pop band Aqualung and currently is performing all over the world with Gecko Theatre Company, Finn Peters is one of the UK’s most in acclaimed jazz saxophonists and Ivo de Greef is one of Europe’s most sought-after Tango pianists) so getting everyone together in one place for an extended period of time was quite tricky.

“Over the last few years, I’ve built up a close working relationship with NMC Recording, including releasing a portrait CD of my own works, entitled Bartlebooth, in 2008, so they were the perfect partners to collaborate with. This disc has very much been a labour of love, and we were keen to take our time over it so that the results would merit the 10-year wait. Our producer, Simon Hall has been an incredible part of the whole process, brilliantly capturing the energy of the group, and creating a beautiful sounding disc.”