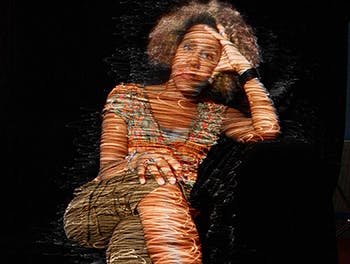 The new arrangement for a video accompanies Keedron Bryant’s viral song I Just Wanna Live, a response to the murder of George Floyd.

Grace writes: “In the absence of words to add, here is a musical response. Our accompaniment to Keedron Bryant’s beautiful song has been written for us by Belize-born British composer Errollyn Wallen CBE. She is the first black woman to have a work performed at the BBC Proms and a life-long friend and inspiration.”

The original song was posted online on 26 May, the day after the death of George Floyd in Minneapolis, and was an instant hit, racking up over 3m likes on Instagram and drawing praise from former US President Barack Obama, basketball legend LeBron James, singer Janet Jackson and actress Lupita Nyong'o.

The soulful track was written by Johnetta Bryant for her 12-year-old son Keedron and is sung a cappella. Keedron has since been signed to Warner Records.

Errollyn said: “The video expresses the hopes and fears of a young black man in America today. It draws on gospel and spirituals, and it’s sung very freely. My job was to make an accompaniment that would underscore and bring out the emotions, but not get in the way of his remarkable voice.

“I wanted the strings and the harmony — all the chords—  to frame this powerful sentiment.”

Errollyn is an award-winning composer and lyricist. See her talking about the making of the accompaniment in this video.