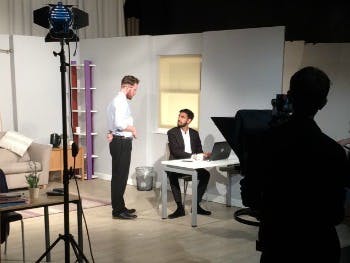 Students from across the Faculty of Art, Design and Media have worked together on a number of projects as part of Media Month.

One of the projects to come out of Media Month was titled “Stationery Express” a television series pilot show, created by students from Birmingham School of Acting and the School of Media.

The show’s producer and current student from Birmingham School of Acting, Hugo Von Fragstein, told us a little more about the project:

What project did you take part in for the collaboration month?

The project was titled “Stationery Express”, a devised theatre performance that myself and three other actors in my year, Sam Williams, Shobat Kadara and Chris Lowry composed for a course module. It was originally designed for the theatre, but with the collaboration project we all saw the chance to turn it into a television series pilot.

Who were you in collaboration with?

I got in contact with fellow students from the School of Media and School of Acting. There were MA students, as well as first and second year undergraduate students, and visiting professionals who came into the process to offer assistance. I think that the very reason Media Month was conceived was to create links between the students and to use a wider range of specialist skills to create high quality work.

How did the University help you with this project?

The opportunity for the equipment and the multi-cam studio only came about because of Media Month, and David Remes (project organiser) put my call for crew up on the Art Design and Media website, as well as sending out emails for me. Birmingham School of Acting lecturers supported our scripts by checking drafts, and a former Director for EastEnders (Nick Prosser) came in to give advice about the camera scripting process.

What skills have you learnt from this project?

I’ve learnt a great deal of acting for television experience, as well as a plethora of production skills. I think the latter directly affected the former. With the knowledge of shots, scene flow, style, post-edit options, constraints, I feel my appreciation has gone to the next level. These are the things that make it a joy to work with even in stressful environments. Knowing that the director is doing x and y, that the producer could change the entire look of a show, and how an actor can step up to facilitate and ‘slot in’, or cause an absolute jam.

How did you create your contacts?

I try and build up a respect and appreciation for every person I work with.  What I’ve found is that everybody in this industry loves what they do. All I tried to do was understand (to varying levels) what job needed doing and meeting somebody that could do it. Building a relationship of honesty. Meeting Debs, our floor manager has been a plus. She was wonderful. I didn’t want to work with people that would follow me round, nor did I want somebody to say what I wanted to hear. The people that got on board were pragmatic independent and fun people to work with.

Are you hoping to do something with your creation in the future?

There were two things I wanted to get out of the project. The first was to experience more time in front of and around the camera. The experience of performing and then being able to go around to check my performance on camera, gave me so much to work on and to tweak, that I feel as an actor I was rewarded with an incredible screen experience at this stage in my own training.

The second was to see my producing potential.  After nurturing a desire to produce but never having the opportunity to do it in an environment where I was comfortable to fail and to learn, this was exactly what I wanted.  I have been able to take advantage of some of the challenges along the way to improve, and feel I have become capable of producing my own work in the future. I now understand more and am more able to respect and appreciate everybody I work with a lot more because of this experience. As for the future, who knows, but I think with the experience we gained we’d like to plan a production next year.

What advice would you give to other students who are hoping to do a similar thing?

Do it. The different between can’t and can is won’t, in my opinion. It’s hard, yes, and it took over my world. But I want this to be my world, and if you do as well, then just do it. The things you learn when you run at your own pace with no (or at least small, I’m still at University) safety net gives no better feeling.