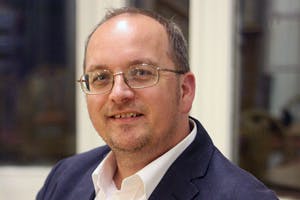 Professor of Music Christopher Dingle has been confirmed as editor for two new book series from Routledge, ‘Living Music’ and ‘Routledge Musical Landmarks’.

Jointly edited with Assistant Professor in Music at the University of Nottingham Dr Xenia Pestova Bennett, ‘Living Music’ will be an open-ended series of edited collections featuring essays on emerging and underexplored composers and performers of new music.

The series will be international and inclusive, with featured musicians typically those who have been overlooked by scholars. The aim of the series is to act as a catalyst for discussion between composers, performers and scholars about recent and current musical trends.

‘Routledge Musical Landmarks’ will be a major series of short books exploring key works, events and moments in music, in all its diversity, which is aimed at all levels of study and engagement, for an audience of students, scholars and concert-goers.

The books will typically provide information not only on the background, genesis and musical materials being discussed, but also consider cultural contexts, reception and issues of performance and interpretation.

Some of the books in the series will focus on individual key works, while others will consider different types of landmarks, exploring watershed moments, ideas and developments that transformed music and music-making.

The series will include some works or topics whose importance was previously overlooked. Initial titles include Bach’s Well-Tempered Clavier, the Symphonies Concertantes and Violin Concertos of Joseph Bologne (the Chevalier de Saint-Georges), Beethoven’s Piano Concerto No.4 and Franck’s Violin Sonata.