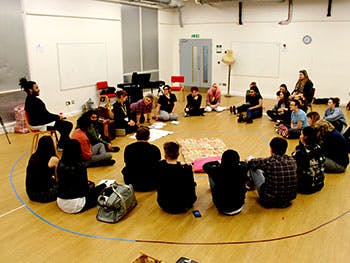 A new play which explores how social media, peer pressure, advertising and fashion magazines impact on how young people view themselves premieres this weekend in Birmingham (Friday 9 – Sunday 11 June).

Performed at mac birmingham, ‘Do You See What I See?’ is a cabaret show devised from research and improvisation, and is aimed at young people aged 11 to 14 and their families.

Featuring original songs and music, the show has been devised and performed by first year students on the Applied Performance undergraduate course at Birmingham School of Acting, part of Birmingham City University.

Working with a team of professional practitioners, including directors Gillian Adamson and Terina Talbot, the cast have called upon their own struggles with body image to ensure the play can tackle what pressures young people are experiencing today. In researching for the show, they also spoke with young people and distributed a survey on various social media platforms about body image.

Birmingham School of Acting’s Applied Performance course seeks to prepare passionate and skilled theatre-makers, who want to make a real difference through drama, singing, dancing, spoken word, a documentary or digital art. The focus is on creating new performances and projects with a purpose.

In ‘Do You See What I See?’ 12-year-old Molly struggles with the way she looks and, affected by society around her, she desires to have the ‘perfect body’. Through social media, catwalks, makeup and fairy tales, the audience is taken on a journey through a day in Molly’s life. A cabaret company assists this journey and tries to answers questions of why she feels the way she does, through music and fun.

Birmingham School of Acting student Samuel Speed from Rotherham, South Yorkshire is one the cast members of ‘Do You See What I See?’ He said:

“Body image should not be ignored. It is one the main factors which affect younger people like myself today. The fact that we have to change something about ourselves every second of the day just to have that sense of fitting in and belonging is upsetting and growing worse.

The subject matter which we are tackling here is not to give a right or wrong answer to an audience, neither is it to solve the problem. But we are at least standing up to the reason and saying that there is help out there and no one has to or should feel alone. 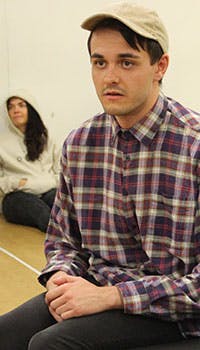 “Each day at Birmingham City University I learn something new, which I feel is shaping me in all different kinds of ways and is opening my eyes up to the world in a bigger picture than before. I may not be ready to face what's beyond the doors just yet, but I know I am being equipped for whatever comes my way.”

As a cabaret show, music plays an integral role to ‘Do You See What I See?’ and the students worked with the Musical Director, Gladstone Wilson, to compose original songs that help propel the story forward.

The play opens with the sentimental ‘Lost and Found’, which establishes the cabaret company as there to ‘help fix what’s broken’, while the play is peppered with a lullaby called ‘Molly’s Theme’.