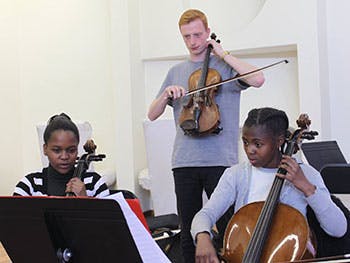 Students at Birmingham City University are hosting an evening of chamber music this month, in order to ensure a transformative education partnership between Birmingham and Johannesburg continues.

The performance, taking place at Birmingham’s Ikon Gallery on Monday 27 February, hopes to raise funds from the the collaborative project, Cape Gate MIAGI Centre for Music & Birmingham Conservatoire – or ARCO, which is also the name for the technique of playing a stringed instrument with a bow.

One of ARCO’s virtual tutors is final year viola student Alistair Rutherford, who has organised the Ikon Gallery concert, which features music by Romero, Strauss and Tchaikovsky.

“For me it seemed a no-brainer to get involved with the project. We spent many months drawing up teaching times and schedules, and then in October 2015, I was confirmed to be teaching my two fantastic students, Njabulo and Kgaugelo. My first one-to-one Skype teaching lesson took place in January last year and I have been teaching the children week-in-week-out ever since.”

ARCO aims to provide the benefits and life changing inspiration of music to children in the most deprived of circumstances. As well as providing transformative music education activities, Conservatoire staff have been acting as role models for vulnerable youngsters living in Soweto, a Johannesburg township deeply affected by poverty and crime.

In addition to the student’s regular lessons at Cape Gate MIAGI Centre for Music in Soweto, the Skype sessions allowed students to receive additional individual tuition and string quartet coaching from Birmingham Conservatoire, which is not currently offered at the Centre. 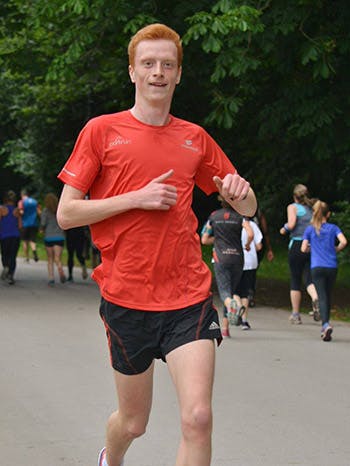 Alongside individual lessons, the masterclasses, workshops and performances taking place at the Conservatoire were streamed live for the students at MIAGI and the wider community to enjoy.

Alistair, aged 21 and from Liverpool, added:

“It was a life-changing experience going to South Africa for the first time in August 2016. We were fortunate to spend five full days with the children in Soweto in Johannesburg. To be able to finally meet with my students in person was such a fantastic experience and over the five days the youngsters made tremendous progress, and it encouraged us to help maintain their incredible hard work and diligence.

I was inspired to host the event at Ikon Gallery for ARCO after providing the children in Soweto with chamber music coaching. It was so rewarding for both the students and teachers, and every single student involved with the project performed in each of their string quartets in the closing concert of the Festival.

As well as receiving backing from organisations in South Africa – including the Goethe Institute and both the Germany and Austrian Embassies – the programme was supported by benefactors in the UK, who donated all the string instruments for the students.

ARCO was originally funded for a year, but its success and a willingness on both sides of the world have seen it continue with indefinite plans.

“We hope that ARCO will be a permanent fixture. Not only is the ARCO project unique, as it provides individual and chamber music tuition on an ongoing basis online, but all of the ARCO tutors based in Birmingham fundraise for the project.

“Certainly, Alistair’s fantastic concert at the Ikon Gallery is a fabulously enterprising addition to the ARCO fundraising programme.”

Alistair’s chamber concert is just one of several fundraising events he has organised in aid of ARCO. Last year, Alistair ran the equivalent distance of the length of South Africa’s coastline, clocking up 1,739 miles (2798 kilometres) by the time he flew out to Johannesburg.

Later this year, Alistair plans to mix his love of both music and athletics to attempt a Guinness World Record; running the fastest half marathon dressed as a musical instrument. Donning a custom-made viola costume, he hopes to raise more funds from running the Liverpool Half Marathon in April.