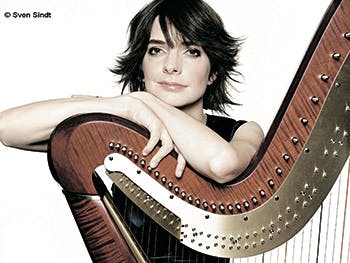 The Welsh-born musician will be supported by fellow harpists Eleanor Turner and Katherine Thomas who will also join the establishment's strings department.

Catrin served as Royal Harpist to His Royal Highness the Prince of Wales between 2000 and 2004 and is internationally recognised for her extensive list of recordings.

The Conservatoire's newly-appointed Principal, Julian Lloyd Webber, said: "We are delighted that Catrin is joining us as International Chair of Harp.

"There is no better – or better known – harpist in the world today and this is a clear indication of where Birmingham Conservatoire is heading."

The 35-year-old, who is highly regarded for her community activities and work with the younger generation, will take up the role in September.

Known as 'the Queen of Harps', she is committed to promoting the instrument, and classical music in general, to a new and wider audience - fitting with the ethos with which Professor Lloyd Webber is directing the Conservatoire.

This appointment places Birmingham Conservatoire at the international forefront of where to study the harp. An inspirational array of orchestral, chamber music, folk, jazz and other themed classes and workshops are planned.
Louise Lansdown, Head of Strings

The new appointments will help the Conservatoire continue to provide high quality training which meets the ambitions of the next generation of professional strings players.