The Beauty of Birmingham – BSA student stars in film project 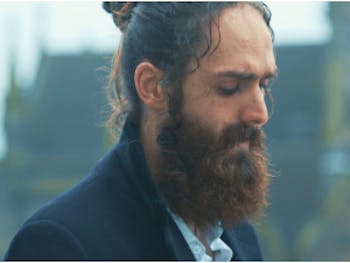 Birmingham School of Acting student Joseph Patrick Khachik recently starred in a project by film-maker Keiran Fuller that explored the culture and beauty of Birmingham. The film takes you on a journey through the city centre, the market, bars and restaurants, meeting different faces and talent found on the streets of Birmingham.

“This particular project is about the beauty of Birmingham and taking the time to appreciate what's around you. Essentially, I want people to watch this video and focus on the beauty of their cities,” explains Keiran

Keiran, who runs a company called Fuller Production, shared a version of what he was working on online, leading Joseph to express an interest in his work.

The main themes of the video for Beauty of Birmingham were culture, energy and gratitude. The base of the project stemmed from Keiran believing we often take the little things for granted and so the aim was to highlight that.

After seeing Joseph’s interests, Keiran contacted Joseph asking if he'd be happy to be a part of the project and gave him the monologue a couple of nights before.

“Instantly, he was asking if he could make a few amendments of the monologue to make it sound more natural and since this project is all about positive affirmations, I let him have that freedom to see what happens,” says Keiran.

Joseph says: “The reason I expressed an interest was because the way he had chosen to show what he had filmed, with the mix of the music, seemed inspiring and gave me a sense of hope. This feeling I believe is quite hard to generate through media but Keiran had managed it quite easily.

“The nature of my course is to use drama, media or creativity to help support social and political change. The work Keiran had produced seemed capable of that, which is maybe why he then asked me to be a part of it. Because I am always eager to be involved in as many projects as possible I of course said yes to his offer,” says Joseph

Using his experience of spoken word workshops, which he had taken part in during his time at BSA, Joseph managed to write how he felt about Birmingham. This then fitted with the feel of the already produced material.

Joseph then drew inspiration from his drama skills module after reading what he had written. The module had been focusing on storytelling and how to dramatise or think about what you are saying when reading a piece of written text.

“I think all of this aided me in my involvement with the project,” says Joseph.

The pair met a couple of days after speaking to start filming for the project. Keiran said: “I couldn't thank him enough and that's why I got in touch because sometimes students do things outside of their university projects and they may go unnoticed.

“I've worked with BSA before, filming their performance of En Route, and Joseph Patrick Khachik stuck out to me, I thought he'd be perfect for the role and I think he's got a great future ahead of him,” says Keiran.