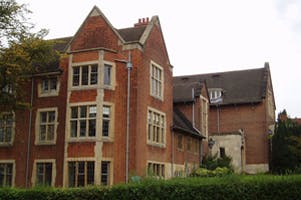 The Grade II-listed Ruskin Hall in Bournville has welcomed students and staff from Royal Birmingham Conservatoire’s Acting courses on an interim basis as preparations for a new permanent home get underway.

The School of Acting has relocated from its previous home at Millennium Point, taking up temporary residence at the historic 1903 building in the leafy South Birmingham suburb, before moving to a new location in Digbeth later this year.

Ruskin Hall, previously home to the School of Art, has been fitted out to support a high-quality learning and teaching experience for students and staff including rehearsal spaces, social areas and other facilities.

The first public building in Bournville, the hall was originally designed as a social centre for the village with the aim of providing a school of arts and crafts for the community to further the ideas and principles of John Ruskin. In 1911 it became the School of Arts and Crafts and an art college in the 1920s.

At the end of the academic year, the majority of Acting courses will then move into its new location close to the creative hub in the Custard Factory and within walking distance of Birmingham City University’s City Centre Campus, with the move being the start of an exciting new chapter in its history.

The School’s Production Department and Stage Management course will continue to be based at Unit 3B Heneage Street, near the Royal Birmingham Conservatoire.