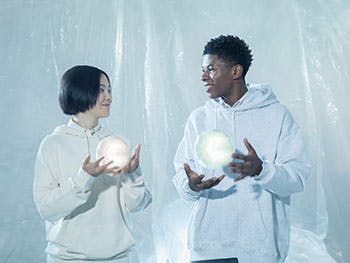 An academic at Birmingham City University’s Royal Birmingham Conservatoire is directing a unique bilingual play highlighting youth culture in both Great Britain and South Korea, and will receive its UK premiere next month.

Applied Theatre (Community and Education) Course Director, Peter Wynne-Willson, is staging ‘Orange Polar Bear’, a raw, funny and heartrending new play about today’s younger generation trying to find their place in a fast-changing world. The production will be staged at Birmingham Repertory Theatre, known as The REP, from Thursday 1 to Saturday 10 November.

Co-written by Korean writer, Sun-Duck Ko and London-based Canadian playwright, Evan Placey, the production is an international collaboration between Birmingham City University’s Royal Birmingham Conservatoire, The REP, the National Theater Company of Korea and Birmingham company, Hanyong Theatre. Inventively staged, and pulsating with energy, ‘Orange Polar Bear’ will be performed by an ensemble of three British and three Korean actors.

The play centres around William and Jiyoung, who are both 15 and living invisible lives in chaotic cities on opposite sides of the world. William is British and lives with his mum – a Nigerian immigrant. Jiyoung is Korean, lives with her dad and grandma in a 15th floor flat, and is looking for her mother who left 13 years ago.

When the two find themselves adrift in a mysterious space, floating like two polar bears on melting icebergs, they wonder if they will ever make it back.

Peter Wynne-Willson has worked in Applied Theatre for more than 30 years, first as founding Artistic Director of Big Brum Theatre in Education, and then as a freelance theatre writer, actor and director. He has written 43 professionally produced plays and directed more than 50 original plays and projects. He was a founding member of the Theatre in Health Trust, and Birmingham Education Arts Forum, and one of the key artists in the seminal early years arts project How to Catch a Moonbeam.

Today, Peter heads Royal Birmingham Conservatoire’s Applied Theatre course, which seeks to prepare passionate and skilled theatre-makers, who want to make a real difference through drama, singing, dancing, spoken word, a documentary or digital art. The focus is on creating new performances and projects with a purpose.

“Despite a distance of over 5,000 miles, younger generations in Korea and the UK are subjected to the same relentlessly bleak 24/7 news cycle. They share concerns about climate change, threats to national security, a widening gap between the rich and poor, as well as domestic issues that concern us all – family and friendship, just as they are forging new identities as young adults. 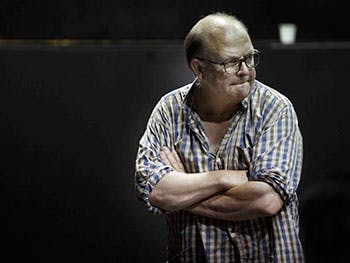 “It’s been wonderful to see how our two writers and our international creative team and cast have worked together to tell a story that crosses boundaries and, while firmly rooted in the contrasting cultures of Britain and Korea, could be played on a stage anywhere in the world and still have relevance.

“A lot of people keep asking me why the play is called ‘Orange Polar Bear’. Well, that is a long story. It is a metaphor, it is very Korean, but really you will need to come to see the play to decide for yourself!”

Peter’s connection with South Korea began in 1999 when he established a Master of Fine Art (MFA) module at the Korean National University of the Arts in South Korea’s capital, Seoul, during the first of three semester-long spells as Visiting Professor of Young People’s Theatre.

Performed in English and Korean, ‘Orange Polar Bear’ features powerful visuals and sound design, with design by award-winning young art director Yeo Shin Dong and original music by internationally renowned composer Yeong Gyu Jang, known for his many film scores including ‘Train to Busan’, ‘The Good the Bad, the Weird’ and ‘A Bittersweet Life’.

This is the fourth in a series of bilingual plays for young audiences developed by Peter in Birmingham and Seoul. Starting with ‘The Bridge’ in 2006, they have all been created by working first with young people in both countries, looking for common ground, and then through a process of equal collaboration.

“‘Orange Polar Bear’ is a story about separation and connection on many levels, which couldn’t be more urgent in a world where so many are uprooted. At a time when countries are becoming ever more insular, ‘Orange Polar Bear’ is determinedly outward looking. Our extraordinary Korean actors and talented, young British actors perform together as one ensemble to tell a story that is clear and resonates emotionally in surprising ways.” 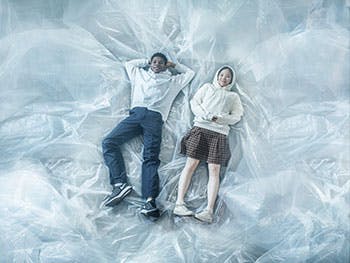 In the UK, students from Birmingham City University’s Applied Theatre course will be running workshops in schools to accompany the play, and the actors will run sessions at Royal Birmingham Conservatoire.

In addition, on Wednesday 7 November The REP hosts a symposium, Making Multilingual Theatre. This will involve a full day of panel discussions and demonstrations exploring experiences of multilingual theatre and a chance to meet the cast and creatives of ‘Orange Polar Bear’, and hear in detail about the making of the show.

‘Orange Polar Bear’ had its world premiere on Thursday 11 October at the National Theatre Company of Korea’s Baek Jang Theatre in Seoul, and was met with wide acclaim.