As part of their course, students Sam and Ellen had the opportunity to go on a four-week trip to Seoul, South Korea to document the rehearsal process of a play directed by Course Leader of the BA (Hons) Applied Theatre degree, Peter Wynne-Willson.

We have been in Seoul for over two weeks now and those weeks have flown by! 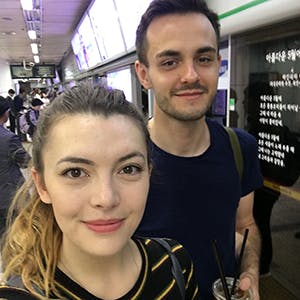 You might be wondering who ‘we’ are, the ones behind is blog, as well as the Instagram and Twitter pages. We are Ellen Lickman and Samuel Speed, two third year Applied Theatre students from the Royal Birmingham Conservatoire (part of Birmingham City University). We have been fortunate enough to have been given the opportunity to spend four weeks in Seoul, documenting the rehearsal process of Orange Polar Bear. OPB is a collaborative piece of theatre, brought together by Hanyong Theatre Company, The National Theatre Company of Korea and Birmingham Rep, in association with BCU. The play is being directed by our course leader, Peter Wynne-Willson.

We’re staying in an Air BnB in Hapjeong, a trendy area close to the Han River. It is bursting with coffee shops and close to Hongik University, which is bustling with bars, clothes shops, restaurants and night life. It’s a great area to experience how students here live, and compare it to home. It’s pretty much the same in all honesty. Across the world, students enjoy beer, food, shopping and hanging out with friends.

Our days have been spent attending rehearsals, writing, documenting, absorbing. But it’s not all hard work, we’ve had a lot of freedom to explore, including a trip out of the city to Mount Mani which we were told would be a 20 minute hike but turned out to take a few strenuous hours instead!!

Here, we’re going to give you an insight into what we’ve been up to. A day in the life of two Birmingham students in Seoul.

We need to be at the theatre for 10am today, so we make sure we’re out of the apartment for 9am. It only takes about 30 minutes to get from Hapjeong Station to Seoul Station on the subway, but first we need to get our caffeine fix from one of the many, many coffee shops near us. Within a five minute walk, I’ve counted maybe 15 places we could choose from, but we usually go to ‘We Are Dreamers’ which is closest. They’ve got to know us there and as we walk up to the counter they’ve already put two iced Americanos through the till. These cost 3500 won each, about £2.40. We then stop at the bakery chain ‘Paris Baguette’ for a quick snack.

The subway is busy on this Monday morning and it is swelteringly hot.

Here is Sam feeling too tall for Asia!

We arrive at NTCK in good time. It’s a really impressive building. Originally it was an American army barracks but it is now the bright red headquarters of the Theatre Company. Outside, there’s a lot of activity because yesterday there was a festival of traditional dance and masks so they are packing up. At the same time, the OPB set is arriving! It looks huge and very tall, some of the action takes place up high on the roof. It’s very exciting to see it all start to come together, and makes the fact that opening night is mere days away very real. Inside the rehearsal room, people are starting to gather. Minju (playing Jiyoung) is stretching and Peter is already in a meeting. This morning, some recording is taking place for a couple of different scenes and I get to make my Orange Polar Bear debut! Listen out for me when you come to see it.

They run one scene as a rehearsal and there is a discussion about speaking over each other. Peter is of the opinion that when the two languages are happening simultaneously, the audience will only tune in to the language they understand. There are lots of interesting discussions of language every day and now we are in the final stretch of rehearsals. Simon, the lighting designer from the Birmingham Rep is busily taking notes and planning. We spend our morning writing blogs and uploading content. 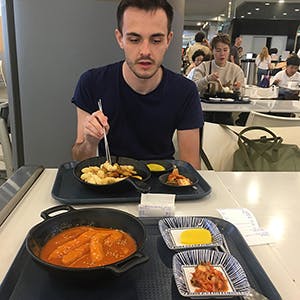 Soon it is lunch time and everyone disperses. We’ve decided to leave for the day and do some sightseeing while everyone else carries on working hard! First though we need lunch too! Seoul Station has a large food court where we have lots of options to choose from. You choose from the board and then wait for your number to be called from the different stations.

I get some tteok-bokki which is a popular dish made from stir fried rice cake noodles in a slightly spicy sauce. Of course, no Korean meal is complete without kimchi and I am a big fan of it!

We’ve decided to spend the afternoon at Gyeongbokgung Palace which is situated in the north of Seoul, under Mount Bugak.

It was the main royal palace of the Joseon Dynasty and built in 1395. It’s had a troubled history, being destroyed during the Japanese invasion by a fire in the 16th century, abandoned for nearly 300 years, rebuilt and then destroyed by the Japanese again during the 20th Century occupation.

Most of what we can see today has been reconstructed since 1989 but they’ve kept true to the original designs. The place was teeming with tourists, many of whom were dressed in the traditional Hanbok dress.

After a long wander round, we headed out and walked down towards City Hall station. On the way we passed a tribute to the 2014 ferry disaster. 304 people, mostly secondary school students, died when the ferry sank and there is still a lot of anger and debate regarding how the government handled the aftermath. It was incredibly moving to see the pictures of these young people and the tributes left, even 4 years later the pain is still very present throughout the country. 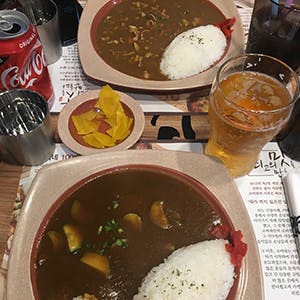 It’s been a long day, and we’re hungry. We’re spoilt for choice and decide on Korean curry. It’s delicious! Tomorrow is another day in the rehearsal room. The actors finally get a chance to get up on the stage and begin the final stage of rehearsals. We’ve got lots more work to do, so we head home to have an early night.

Hope you’ve enjoyed an insight into how our days are spent here. We’ve been so fortunate to be given this opportunity and have been loving every second. The next two weeks will be just as jam-packed with the show starting, I can’t wait for you all to see it!

Our Applied Theatre course seeks to prepare the next generation of passionate and skilled theatre-makers.

What can I do to prepare for my Acting and Theatre degree?

Inspiring the Next Generation: Sam Wyne