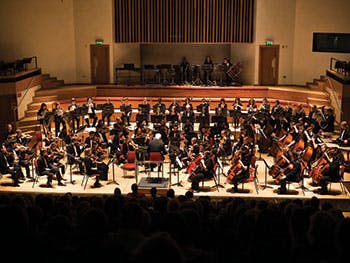 Students at Birmingham Conservatoire, part of Birmingham City University, are to compete for the esteemed Birmingham Philharmonic Concerto Prize this month.

The unique competition, now its 37th year, takes place at Birmingham Conservatoire on Sunday 19 April and will see students accompanied by the Birmingham Philharmonic Orchestra (BPO) as they play for a £1,500 prize.

The BPO Concerto Prize is a competition for solo performers, organised and staged by Birmingham Conservatoire in association with BPO and is acknowledged as the Conservatoire’s premier instrumental competition.

Originally known as The Ludlow Prize, the competition was founded in memory of David Ludlow, who was a widely respected and talented violinist who conducted the BPO in its formative years.

Alastair Moseley, principal clarinettist for Birmingham Philharmonic Orchestra and organiser of the competition, said: "Although this is a contest, audiences will experience an uplifting concert where the students can really show their artistry and skill playing some of the greatest classical music."

Three pieces will be performed; Berg’s Violin Concerto, Mozart’s Piano Concerto and Tchaikovsky’s Violin Concerto Op.35, between Rossini’s overture to his 'Semiramide' opera and Borodin’s 'In the Steppes of Central Asia'.

Violinist and finalist Shi Ling Chin said: "My time studying at Birmingham Conservatoire has been exciting and memorable, thanks to my teachers, who have guided me all along. I'm looking forward to the competition which is a tremendous opportunity for me to perform the Tchaikovsky with an orchestra."

The Birmingham Philharmonic Concerto Prize kicks off at 3pm on Sunday 19 April and tickets are available from the Birmingham Conservatoire Box Office or via Eventbrite.