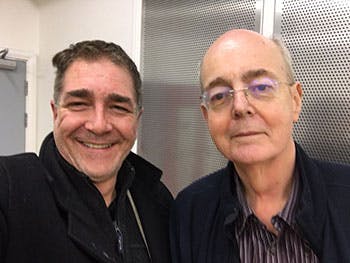 The prolific and highly-successful British playwright David Edgar has returned to his hometown of Birmingham to oversee the premiere of a newly-revised version of one of his most famous productions.

Originally written in 1994, Edgar’s ‘Pentecost’ is being performed by Birmingham City University’s Royal Birmingham Conservatoire Theatre Company at the Patrick Centre, Birmingham Hippodrome from 13 until 16 December.

“The play is usually done naturalistically and, although much of the production is done in that way, director Aleksandar Dundjerović has invented an extraordinary, poetic ending for the play, which is different from any previous production.

“The Royal Birmingham Conservatoire has unique facilities and noted teaching skills, so I was excited when Aleksandar suggested I become involved with the rehearsals of this production. I came in to hear the first read-through and a couple of other rehearsals, as well as the dress rehearsal. I have enjoyed and valued being part of the process of making this production.”

Edgar was born into the fourth generation of a theatrical family, has long associations with the Birmingham Repertory Theatre and the Royal Shakespeare Company, and has seen more than 60 of his plays published and performed on stage, radio and television around the world.

“Birmingham has always had a justified reputation for music and the visual arts. More recently, it gave a home to Britain’s leading ballet company. I have been visiting the Birmingham Rep since I was three years old. But there's no doubt that the presence of two major universities teaching drama and theatre arts has invigorated the city’s cultural scene.”

A medieval art discovery in a dusty church with the potential to change history is at the centre of ‘Pentecost’. This politically-topical drama sees armed and desperate migrants storm the church holding hostage the art historians who have come to study the fresco. 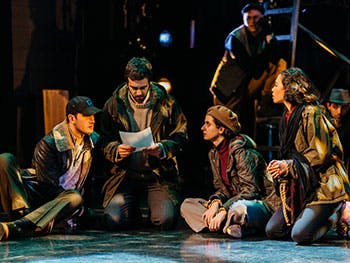 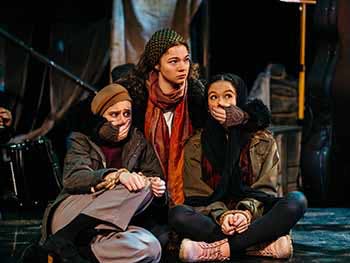 ‘Pentecost’ is directed by Aleksandar Dundjerović, Professor of Performing Arts at the Royal Birmingham Conservatoire, added:

“The play is set in the Balkans during the early 1990s, when civil war was ravaging Yugoslavia. David Edgar, one of the best living British playwrights, made a story for the changing world of the beginning of 1990s, the one that we left behind and that we should be much better off without. With the movement of mass migration in 2015 of millions of refugees from wars, we are now all part of Edgar’s world depicted in ‘Pentecost’.

Despite the present divisions in the world, Edgar gives us warning that we may still save ourselves from neo-conservatism and neoliberalism, new nationalisms and neo-colonialism and enforced progress driven by corporate thinking. The play offers a resolution to conflicts – be it financial, religious or ideological – by reminding us that we are all part of the same humanity, and we all share the same vision of belonging to something higher than we are.

Born in Belgrade, Serbia, Dundjerović is an award-winning professional theatre director and throughout his career has worked on major productions in his home country as well as in Brazil, Canada, Columbia, Iran, the USA and the UK.

‘Pentecost’ was first performed in 1994 at the Other Place by the Royal Shakespeare Company and directed by Michael Attenborough. This production transferred to the Young Vic in 1995, where it won that year's Evening Standard Award for Best Play.

The latest incarnation is performed by Acting students from the Royal Birmingham Conservatoire, part of Birmingham City University. Two of the cast members – Henry Glyde and Hugo von Fragstein – have recently been awarded prestigious Laurence Olivier Bursaries. Established by the Society of London Theatres (SOLT) in 1987, the bursary scheme provides financial support to exceptional drama students.

‘Pentecost’ features sequences of traditional Slavic folk dancing and the students were trained for these sections by Russian choreographer, Olga Kozadayeva from Tambov State University.

“It was a great experience for me to train Birmingham City University students. They are all so talented and picked up my choreography very easily.

“I was in awe at the facilities the staff and students at Birmingham City University have at their disposal to learn and teach. I was also impressed by the cast’s work ethic during rehearsals. I hope their performance of ‘Pentecost’ is a great success. We also hope that our little contribution to the show – teaching dancing and Russian speech – will play a positive role.” 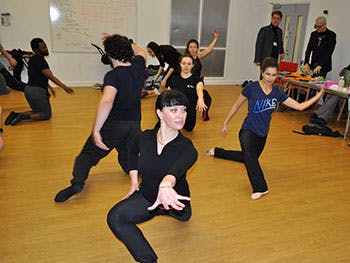 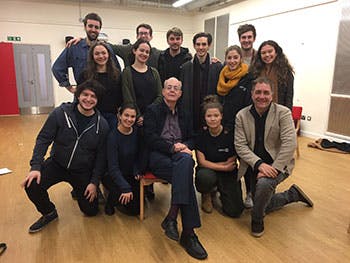 Kozadayeva was visiting Birmingham City University as part of an exchange organised by the institution’s Internal Office and funded through Erasmus+ International Credit Mobility. She was accompanied by Tatyana Kozhevnikova, the Dean of the Faculty of Culture and Arts from Tambov State University, as well as Deputy Head of its International Relations Department, Yuri Zusman, and they spent time meeting with students and academics in various Schools and Departments at Birmingham City University.

Tambov State University is the second largest university in the Central Chernozyom Region of Russia and is named in honour of the Russian poet and statesman, Gavrila Romanovich Derzhavin. The University’s visit to Birmingham established new collaborative projects between the two institutions, including student exchanges, visiting professorships and the potential for joint productions between performing arts scholars in the future.

For more information and to book, visit www.bcu.ac.uk/events