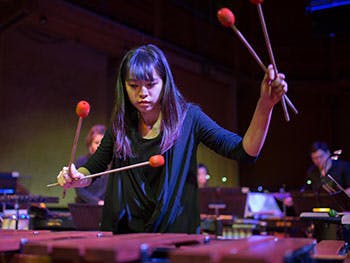 Six percussion students from Birmingham City University’s Royal Birmingham Conservatoire will appear in front of a stadium crowd as they perform at the 2018 Gymnastics World Cup.

The Royal Birmingham Conservatoire’s Millennial Percussion will perform in front of up to 15,800 spectators as part of the Gymnastics World Cup opening ceremonies on both Wednesday 21 and Thursday 22 March. The competition will also be broadcast across the BBC (BBC One, BBC Red Button, BBC Sport website and mobile app).

Led by Sophie Hastings, Head of Drum Kit and World Percussion at Royal Birmingham Conservatoire, the ensemble will perform an excerpt from ‘Apex’ by Golden Globe-nominated composer Ben Wallfisch, who has worked on more than 60 feature films over the last decade, including ‘Blade Runner 2049’, ‘Dunkirk’ and ‘Hidden Figures’.

“It’s a real buzz to see the students playing to so many people; what an experience for them! Let’s hope the TV cameras capture some good shots.

The exposure at the Gymnastics World Cup will showcase the Percussion Department's versatility whilst also presenting the students with a fantastic professional development opportunity.

Millennial Percussion’s Gymnastics World Cup showcase will also encourage audience participation during a samba compilation that will feature rhythms the students learnt during a recent trip to Brazil.

In 2016, students from the Conservatoire’s Percussion Department trained with GRES Portela in Rio de Janeiro during their Easter break, as well as visiting a unique educational programme in the country’s north east.

GRES Portela is the most successful samba school in Rio de Janeiro, winning 21 titles in the city’s annual Carnival since 1932.

Prior to this, the students visited the city of Salvador in the state of Bahia, where they visited a peer-to-peer learning initiative with the Bahia Orchestra Project – a pioneer initiative in Brazil modelled on the Venezuelan El Sistema programme. 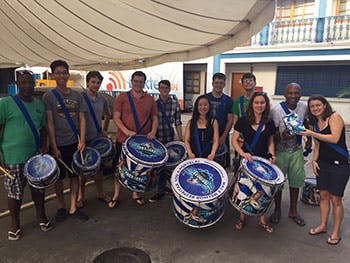 El Sistema aims to transform the lives of children in deprived communities through ensemble music making and Royal Birmingham Conservatoire works in partnership with its UK equivalent, In Harmony.

Millennial Percussion’s performance at the Gymnastics World Cup will fill Arena Birmingham with the sounds of a vast array of instruments, including an opera gong, cymbals, apex drums, a taiko, surdos and a repinique.

As the host nation, four British gymnasts will compete alongside the other nations in the Gymnastics World Cup. With the Commonwealth Games in April, this event offers the last chance to see some of the world’s best gymnasts before they jet off to compete on Australia’s Gold Coast.