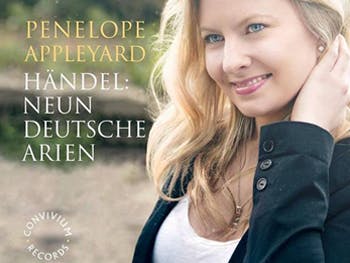 Along with Penelope, Florisma – combining the words ‘flourish’ and ‘melisma’, the latter being a group of notes sung to one syllable of text – was formed by Michelle Holloway (recorder, from Haywards Heath in West Sussex) and Hetti Price (Baroque cello and viola da gamba, from Bournemouth) while the three were studying at the Royal Birmingham Conservatoire.

They were soon joined by harpsichord and organ student William Drakett from Bristol before going on to win the Conservatoire's Early Music Prize in which they were praised for their communication, expression and creative ornamentation – attributes which have gone on to be recognised in their debut recording.

“We all met through the Royal Birmingham Conservatoire’s Early Music Department. We initially played in each other's projects before realising we had similar musical ideas and aspirations. For example, we all had a love of Baroque repertoire and all came with a parallel creative approach.

“The Royal Birmingham Conservatoire certainly provided an environment for us to meet likeminded musicians and gave us the opportunities to be inspired and to develop musically alongside each other.

“The chamber coaching we received was vital in furthering our potential and got us playing as a unit, and the fact we each received excellent tuition individually meant we were all confident in bringing our own ideas to the group table.”

All graduating with distinctions in performance, the foursome went on to pursue performing careers, particularly involving historical music. After a busy time forging their freelance schedules, they came back together and recorded their first disc this year, along with Aileen Henry (triple harp), a graduate of Trinity College London.

Discussing the historical nature of the music in the disc’s programme notes, Penelope Appleyard wrote:

“Händel’s ‘Neun Deutsche Arien’ – settings of extracts from Barthold Heinrich Brockes’ poems ‘Irdisches vergnügen in Gott’ (‘Earthly Delight in God’) – remained unpublished until 1922, becoming known as one of the composer’s best kept secrets. Their air of mystery makes them all the more beguiling.

In style they are quietly theatrical, intimately elaborate, each boasting the kind of melodies that cry out for decoration, but always in a style reflective of their worshipful subject matter.
Penelope Appleyard

Penelope Appleyard and Florisma’s disc was officially launched on Friday 20 October with an intimate candle-lit performance at the Gresham Centre, part of St Anne and St Agnes Church in London. The chamber ensemble are planning more concerts in historical settings around the UK to further promote the disc.

The album features further involvement from the Royal Birmingham Conservatoire in the form of Baroque oboe tutor Gail Hennessy – one of the disc’s two guest soloists along with Baroque violinist Penelope Spencer – and Early Music teacher, Andrew King, who produced the record.