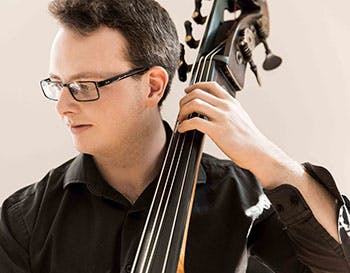 A graduate from Birmingham City University’s Royal Birmingham Conservatoire has become the newest member of the Metropolitan Opera Orchestra in New York under maestro Yannick Nézet-Séguin.

Double bassist Edward Francis-Smith was selected through a rigorous blind audition process that saw him beat off competition from hundreds of other applicants wishing to be part of the world-famous Metropolitan Opera.

Originally from Penzance, Edward began his studies aged 10 with his father, before becoming a pupil of Thomas Martin at the age of 12. He continued to study with Thomas as part of his bachelor’s degree at Royal Birmingham Conservatoire.

“Studying with Thomas Martin at Royal Birmingham Conservatoire was the most formative period of my entire musical education. As well as giving me the technical foundations needed to perform on my instrument, Tom encouraged me to push myself and explore music as a whole.

“His passion for the double bass and music itself has been a huge inspiration for me in pushing myself to the achieve the most possible. I am happy and proud to attribute a large part of my successful audition for the Metropolitan Opera in New York to the time I spent studying with Tom.”

Edward has performed and toured with numerous British orchestras including the London Symphony Orchestra, the 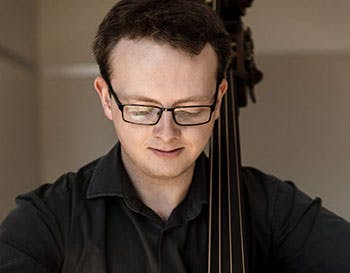 Following his undergraduate studies in Birmingham, Edward gained a place at the Curtis Institute of Music in Philadelphia in 2016 under Harold Robinson and Edgar Meyer. He graduated with an Artist Diploma in May 2018.

I’m terribly proud of Ted. Until he went to Curtis – arguably the finest music school in the world – I was his only teacher. His father used to drive him to Banbury all the way from Cornwall for long lessons until he was old enough to come up by himself on the train. He has a great mentality and never tired of learning.

“When the time came, Ted opted for Royal Birmingham Conservatoire where he continued to flourish and, after his second year, tried for Curtis, becoming the second British student to be accepted on any instrument in 14 years!

“The Metropolitan Opera is considered the most prestigious job in North America for a musician and wouldn’t Ted land the position! This was all behind a screen!

“I’m looking forward to dinner in New York next September with Ted and another Royal Birmingham Conservatoire graduate, Chia Ying-Yin, who will soon start a Master’s degree at Yale on a full scholarship.

“The success of the teacher is in the pupil. I’m happy!