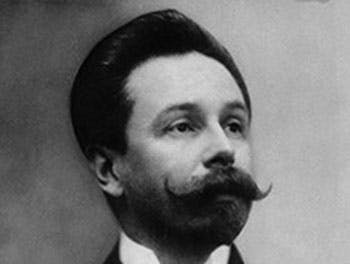 Birmingham Conservatoire will be celebrating the works of Russian composer Alexander Skryabin next month, with a series of inspirational performances coinciding with the centenary year of his death.

Running from 11 – 22 February, the ‘Skryabin and the Russians Festival’, will also celebrate the musical works of other Russian greats, including Stravinsky, Prokofiev and Sergei Taneyev – Skyrabin’s teacher.

Born in 1871, Skryabin was influenced by the works of Polish composer Frédéric Chopin and went on to develop a style reflecting his fixation with mysticism as well as Synaesthesia – the neurological phenomenon in which senses can combine to ‘see’ sounds.

Skryabin’s innovative and at times controversial style had great influence on composers such as Igor Stravinksy, Sergei Prokoviev and Nikolai Roslavets and was a pioneer of the Modernist movement. Although highly acclaimed during his lifetime, during the 1930s Skryabin’s music was disparaged in the West, with Adrian Boult himself describing it as “evil music”. Eighty years later, opinions have changed and Skryabin is considered to be one of the greatest modern composers.

Birmingham Conservatoire staff member Simon Nicholls, a distinguished pianist himself, is a leading expert in the Russian's work. The festival coincides with the publication of Simon's new book on Skryabin, Skryabin: Notebooks, which is the product of many trips to Russia to read Skryabin's letters and private notebooks.

Musicians performing at the festival include Susan Gritton, Peter Donohoe, Julian Jacobson and Thomas Riebel, who’ll be exploring the exotic and mystical style of Skryabin’s work.

"We will connect to other Russian composers throughout the festival such as Rachmaninov, Tchaikovsky, Prokofiev, Kapustin and Medtner, featuring performances by students and distinguished artists, including pianist Julian Jacobson and soprano Susan Gritton."

Other highlights include masterclasses led by conductor Howard Shelley and pianist Pascal Nemirovsky, as well as a world premiere of Dialogue in the Dark Op.179 for Violin and Double Bass from Dmitri Smirnov – regarded as one of Russia’s most eminent living composers.

For more information and to book tickets, visit Skryabin and the Russians Festival.

Festival pass: Purchase a festival pass for £50 (£30), a saving of over £40 on individual ticket prices, which allows entry to all events taking place at Birmingham Conservatoire venues.