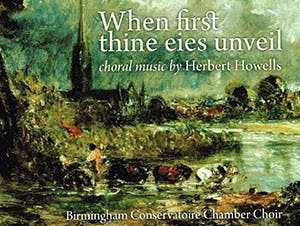 The acclaimed Chamber Choir at Birmingham Conservatoire, part of Birmingham City University, has released a new CD with the SOMM label.

Recorded in The Church of St Alban the Martyr in Highgate, Birmingham, the ‘When first thine eies unveil’ CD features the music of Herbert Howells.

Particularly known for his large output of Anglican church music, Herbert Howells was an English composer, organist, and teacher. As an organist by training, Howells added significantly to the repertoire of English organ music, notably in two organ sonatas, four organ rhapsodies, and sets of psalm preludes.

Paul Spicer, Choral Director of Birmingham Conservatoire’s Chamber Choir, said: “Herbert was my composition teacher at the Royal College of Music. The new CD features rare Howells repertoire and for the first time has all the early Westminster Cathedral Latin church music together including the big scale Mass in the Dorian Mode.

“For me the star of the show is an anthem he wrote in 1925 called ‘When first thine eies unveil’ which has never been recorded before. It builds to an incandescent climax and includes a beautiful tenor solo from Christopher Fitzgerald Lombard. The music list also includes a motet called Levavi Oculos Meos which I reconstructed from Howells’ manuscript and which is also a first recording.”

For more information and to purchase a copy of the CD visit, Somm Recordings.