Birmingham Conservatoire graduate to appear on The Voice 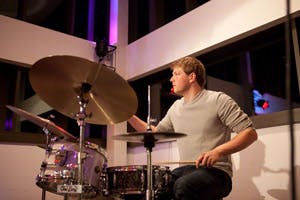 A graduate from Birmingham Conservatoire, part of Birmingham City University, has received £10,000 from the BBC Performing Arts Fund and is set to appear on BBC’s The Voice UK this weekend (Saturday 15 June).

Jonathan Silk, based in Birmingham and originally from Scotland, graduated from Birmingham Conservatoire in 2011 and is currently developing his skills as a drummer, composer and big band leader as well as preparing for a UK tour in 2014 with the Jonathan Silk Big Band.

After working closely with Town Hall Symphony Hall’s Jazzlines programme, Jonathan applied to the BBC Performing Arts Fund, which is supported by phone voting lines from The Voice UK.

Since its inception in 2003, the BBC Performing Arts Fund has already awarded over £4m worth of grants, as well as offering mentoring and advice, helping grant winners to achieve their most ambitious goals.

This weekend’s episode of The Voice UK is set to include footage of successful grant winners, with an update on what they’ve been up to since receiving funding and what their upcoming plans are as they develop their careers in the performing arts sector.

As well as using the funding to develop his compositional skills in writing for large ensembles, Jonathan also has a series of visits lined up to European jazz festivals and a trip to New York to study with composer Maria Schneider.

Jonathan will be launching his new album ‘Uncouth’ on Monday 8 July at the Old Joint Stock Theatre in Birmingham. Find out more information here.