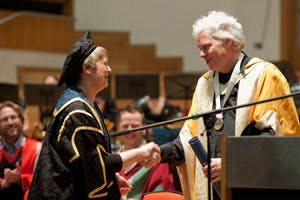 World famous composer Heiner Goebbels has been conferred with a prestigious Honorary Doctorate from Birmingham Conservatoire.

Goebbels’ award formed part of the ‘Frontiers +’ contemporary music festival which not only celebrated his groundbreaking work, but also showcased a selection of new works by Birmingham Conservatoire students.

Luke Deane, a composer studying at Birmingham Conservatoire was given the opportunity to meet Goebbels during his visit. Luke said: “I was lucky enough to have a tutorial with Heiner during the festival and show him my work. He spoke of a triangle of experiences in a piece of music, the audiences perception of meaning and how he felt that it was important to leave space for the audience to fill with their own imagination”.

The ‘Frontiers+’ festival coincided with an announcement at the Norwegian Embassy that Heiner Goebbels is the winner of 2012’s International Ibsen Award, one of the world’s most admired theatre prizes, honouring Goebbels for bringing a new artistic dimension to the world of theatre.

“Heiner’s work is radical, critically informed and untrammelled by traditional demarcation lines between art forms and genres. Birmingham City University and its Conservatoire were proud to host Heiner Goebbels and music associates, re-affirming our commitment to those at the frontiers of music who break new ground as much as to those that plough that which already exists”.

In June, Goebbels returns for the UK premiere of Walden as part of the Cultural Olympiad’s London 2012 Festival, performed by Ensemble Klang (Netherlands) and Birmingham Contemporary Music Group. As part of its end-of-year celebrations, the Birmingham Conservatoire Symphony Orchestra will perform parts of his counterpart piece, Surrogate Cities, the day before Walden.