Applied Theatre – The smart choice for those who have a passion for drama, and want to make a real difference in the world 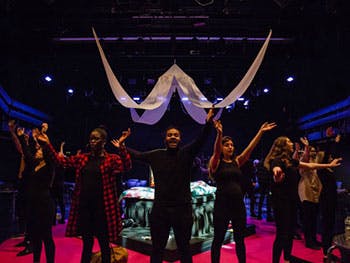 Our BA (Hons) Applied Theatre course is something of a hidden gem at Royal Birmingham Conservatoire, part of Birmingham City University.

It is taught by a committed team of professional practitioners, dedicated to inspiring the next generation of theatre-makers who will perform in a range of settings including schools and colleges, community centres, hospitals, prisons or even out on the streets. The aim is to create theatre with a purpose, theatre that makes a difference.

The course is a great option for students that love drama, and want to make an impact in the world using their passion and creativity.  Whilst there is no shortage of people who want to perform, not so many choose to follow this alternative route. This is often because they do not realise the course exists, and means they could miss out on an exciting, unusual, inspiring degree that is packed with transferable skills. 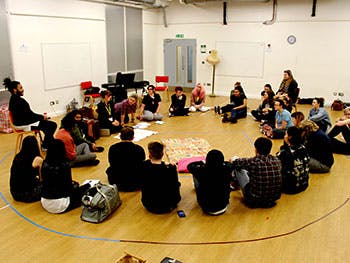 BA Applied Theatre also boasts an admirable track record for producing graduates that gain employment across a range of fields. In Birmingham alone we have developed a database of more than 60 companies that are working in the theatre and performance industry, many of which are involved in the course; often providing work placements, internships and pathways to employment. We share that directory of companies with our first year students as soon as they arrive, so that they feel connected to the theatre community in the city immediately.

But what is Applied Theatre?

‘Applied Theatre’ is an umbrella term for the kind of theatre that often happens in non-traditional theatre spaces, the aims of which are either educational, social or political.

It has a strong history in the UK; over the last 50 years a growing body of influential work and a widening array of approaches and contexts has developed. Our students focus on devising their own work, and they learn mostly by doing – creating new pieces in a range of genres, working with real audiences, and running workshops; as well as building up their ability to facilitate and lead sessions. They also get the chance to develop their performance skills, including (but not limited to) acting, singing and dancing.

I meet so many young people who could really flourish on this course, but don't realise that Applied Theatre exists! They are the young people who love drama, and are bursting with passion and ideas for ways of making a difference.

They have the drive and the ability to make new work, and to leap out into the world as the next generation of applied theatre-makers. Those that come to us with those qualities have a thrilling three years, and never look back.

Students on this course really enjoy their time at Royal Birmingham Conservatoire, and when they leave us they are employable – 100% of our students are employed after 6 months; 84% in graduate -level positions. They work for theatre companies, arts organisations, youth groups, schools, or as freelance drama workers, or, they progress to further study.

Studying Applied Theatre as a degree is a sensible option for anyone who not only wants to pursue a career in theatre and performance, but also wants to create work of real and lasting value in the world around them.