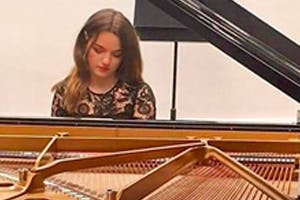 The final of this year’s Ambache Prize for the Performance of Music by Women Composers took place recently and took the form of a Monday lunchtime concert in the Recital Hall, providing a showcase of music written by women.

The Ambache Prize celebrates the importance of music by female composers from all periods and across all genres. Open to both undergraduates and postgraduates, students can perform as a small ensemble or soloist, and entrants are encouraged to research and devise imaginative programmes containing repertoire, which remains little known.

The adjudicators were pianist, author and passionate advocate for the revival and promotion of music by female composersDiana Ambache and RBC Interim Principal Dr Shirley Thompson. They were delighted to award first prize to final-year BMus piano student Gina McDonald, whose performance of MélanieChasselon’s ‘Nocturne’ was “convincing and committed, and beautifully introduced".

Second prize went to the Félicité Piano Trio, made up of MMus student Ricardo Brown Roger, and BMus students Lucy Samuels and Lucy Eccleshall, for their performance of the first movement of Clara Schumann’s Piano Trio, “for communicating their evident involvement with and enjoyment of the ensemble music-making”.

This year’s competition had a record 16 entries, which required two lengthy heats, culminating in the lunchtime concert final, which provided a snapshot of the six finalists’ programmes.

Dr Shirley Thompson said: “Such increased interest in this competition is testament to the increasing emphasis in RBC’s Music provision on broadening the curriculum, and on exploring previously little-known or performed music. We hope to replicate this level of interest in future years!”