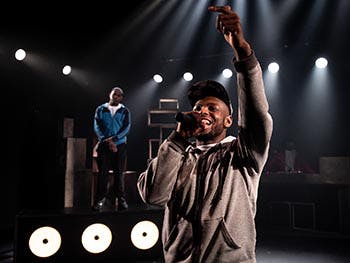 A BCU alumnus is on route to stardom thanks to his lead role in exciting new show GrimeBoy, currently on stage at The REP in Birmingham.

Keiren Hamilton-Amos, who graduated with a degree in Applied Performance (Community and Education) in 2014, plays the lead role of GrimeBoy in the play, alongside also being involved in the creative aspect of the production too as Movement Captain.

GrimeBoy, which tells the story of an inner-city teenager desperate to be the greatest Grime MC, is written by Birmingham Poet Laureate Casey Bailey, who also graduated from BCU with an MA in Educational Leadership in 2017. The production is on stage until Saturday 30 April, before going on tour at venues across the West Midlands, including BCU on Wednesday 4 May.

Keiren’s role in the play has been ongoing for years, thanks to being involved with the production from the early stages. He said: “I met Casey whilst I was doing a course at The REP around poetic theatre makers a few years ago. GrimeBoy started off as a one man show, and I helped during the research and development stages of it, which is basically when you look at the script and decide what works and what doesn’t.

“I then went and worked elsewhere, and out of nowhere, I was offered the chance to audition for the show. It was great knowing that they thought I was good enough to audition. I went into the audition, did my best, and here we are." 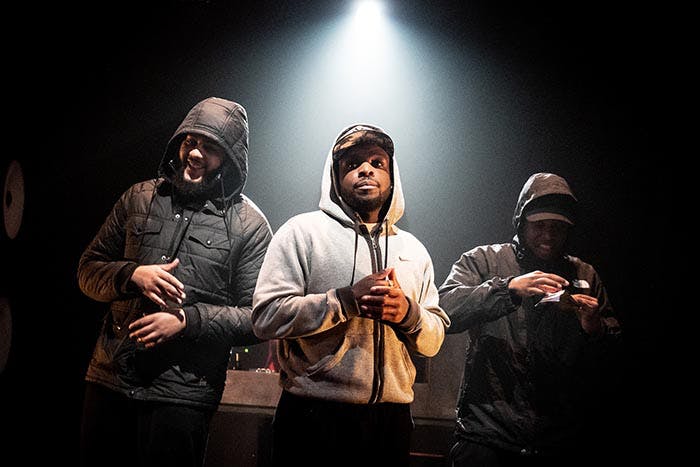 “GrimeBoy is about a young man that is aspiring to be an MC, showing the trials and tribulations of the world around him, as well as the sacrifices you must make. How can you teach someone to do better than you've done, when you haven't necessarily addressed all those issues within yourself? And what do you do when you have an opportunity presented to yourself, do you do the hard thing, which may be the right thing to do? Or do you do the easy thing, which could be the wrong thing to do?

“My favourite thing about the show is the nostalgia. It is set in the mid-noughties, so it really takes me back to the time of MSN, being at the back of the bus and putting my phone on the windowsill to make the music louder, and trips to HMV and flicking through CDs.

"It’s also been great to tell a Birmingham-based story. There are so many moments in the show that are relevant to the city, like references to the Bullring and the number 11 bus. It has been a really homely show to work on, and you can see the audience being able to connect with it.” 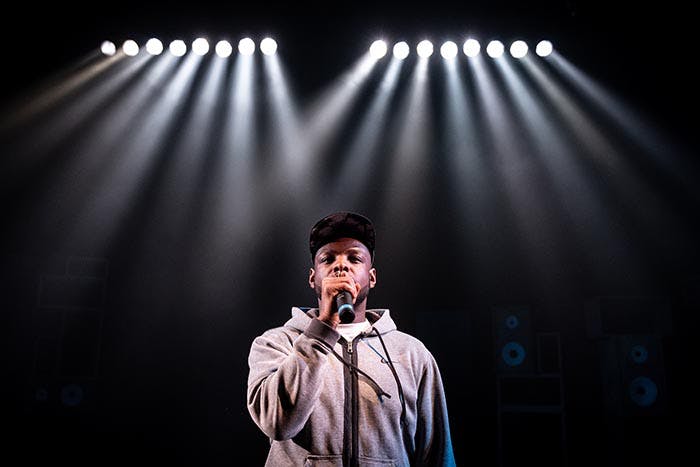 As well as performing in the show, Keiren has also been in charge of Movement in the play too. He said: “Movement is when you’re trying to show in physical action what you can’t say in words. My cousin, Corey Campbell, who also studied at the Royal Birmingham Conservatoire and is now Co-Artistic Director at Coventry’s Belgrade Theatre, started a physical theatre company and under his guidance, I learned and understood what movement was and how movement can be used in plays.

“From that, it spiralled into movement directing. The director of GrimeBoy knew that I was good with movement, and although we knew it would be hard work to be the lead and directing the movement, I wanted to give it a go. It just worked really well for me and the rest of the team.”

Keiren puts his success in the show down to the skills he picked up whilst studying at BCU. He said: “Applied theatre is all about community work, and my GrimeBoy character would be a member of a hard-to-reach community.

“By having a level of understanding around how to approach the young people in those areas, I was able to bring a genuineness to the character, a level of understanding and compassion. Whether it be young or elderly people, whoever it may be, there's always a story that has brought them to this moment. You must value that story because you don't know what hardships they may have faced. My course allowed me to have a wider awareness of my character rather than just what's on the page.

“I’m really looking forward to returning to BCU to perform the show as a professional, and not a student. To be able to go back and show the skills that I picked up on my course, and continue to pursue, will be really exciting.” 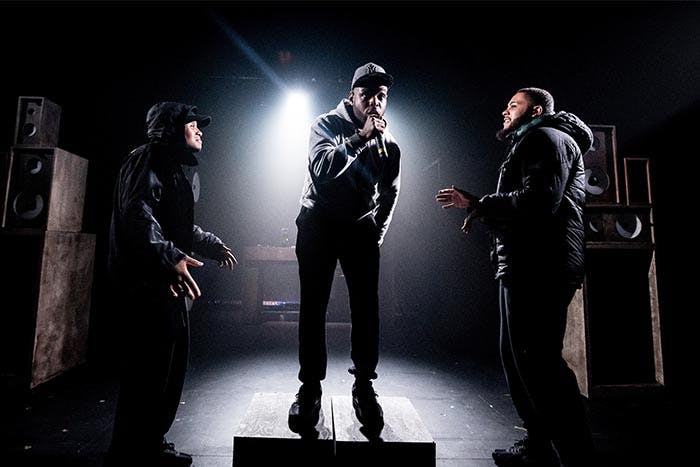 We can expect to see Keiren even more in the future, thanks to his own upcoming show ‘Pooled’ and the publication of his children’s book ‘The Adventures of Lukewarm and Pete's Sake, King John and His Throne” early next year. He said: “I’m in rehearsals for my own show at the moment. I won a competition, which then gave me the commission to make a trailer for my play. I’ll be showing it to industry professionals soon, and then it should be on stage by early next year.”

With a successful career underway, and exciting future ahead, Keiren has top advice for current Applied Performance students. He said: “The value of the course is sometimes hard to see when you're doing it every day. But to be able to walk into a room of hard-to-reach people, and for those people to feel inspired, is incredible. I’ve had people come up to me who now work in the arts, because I inspired them years ago.

“The course really opens up so many different routes for you too. You can go down the teaching route or go into event planning because you’ve picked up skills like funding and producing on the course. But also, as it gives you the skills of every aspect of theatre, from performance to management, what you learn really is invaluable in this industry.”

GrimeBoy is on stage at The REP in Birmingham until Saturday 30 April before going on tour at venues across the Midlands. It will be performed at BCU on Wednesday 4 May. BCU staff and students can register for free tickets here.