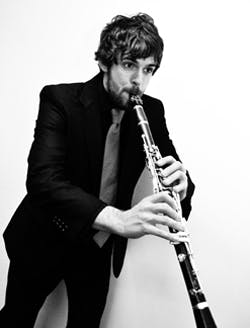 In today’s constantly-evolving music industry, a musician is likely to pursue a ‘portfolio career’, working in several areas simultaneously. In a great example of this, Conservatoire graduate Jack McNeill has released three albums as part of a folk duo where he plays guitar; he plays clarinet for various groups and orchestras on a freelance basis; and works as a music teacher for students of various ages and abilities.

Already an accomplished musician after undertaking a music degree at Birmingham Conservatoire, Jack nonetheless felt he would benefit from further experience and tuition, moving on to complete a Master’s and then the Advanced Postgraduate Diploma in Music (Professional Performance).

He said: “I was very fortunate at the Conservatoire that I really got stuck in with the composition department and volunteered to play any clarinet part that was needed for any concert going. I spent four years at undergraduate level getting to know people and I got to a certain point when I’d finally got a clear idea of what I wanted to do, but I still felt I had a lot to learn.

“When I moved onto Master’s level, I worked with composition tutor Ed Bennett on his own ensemble, Decibel, which performs new and experimental pieces, so I was moving from a student-tutor relationship to a working relationship which was a really good move. The Conservatoire has a great creative atmosphere and all the people who teach there are very involved in the local scene. It’s great to learn from them, getting that direct link into the professional world.

“The courses were fantastic – they all had just what I wanted, particularly the APD which is really about gearing you up for a career as a professional performer, and as such you’re assessed in three public performances, which was something I wouldn’t have got anywhere else. The Conservatoire was also very flexible with my teaching commitments, enabling me to fit my part-time work around my studies.”

As Jack built his reputation as a musician both during and after his time at the Conservatoire, the contacts he made there proved invaluable, as he worked with fellow students and tutors on a variety of projects.

He added: “I formed my folk duo with Charlie Heys, who was also a student at the Conservatoire, and we sometimes play with other musicians from our course as well. We started up in 2007 and played a few gigs in the local area, before entering the BBC Young Folk Awards, where we reached the final. Our first CD followed, and we’ve now just released our third. We write and arrange all of our own material, which is all very rooted in folk traditions. I have my own chamber music group, The Wernberg Trio, which again was formed with two other former Conservatoire students.

“I’ve also begun the process of putting my name forward for orchestral and solo performances – I’ve done a couple of orchestral performances and some more modern pieces. It’s something I’m just starting out at and hope to develop further, and it’s just a matter of getting your name out there and making contacts so that one thing leads to another.

“I teach privately to pupils at a wide range of different ages and abilities and also work for the local music service, as well as working with some very young children through two organisations – Tiny Tunes and Music Mites. I’ve also worked with Joe Broughton, who runs the folk music course at the Conservatoire on Folk World which is a workshop to get young people interested in folk music and to build their aural skills because nothing is ever written down in these sessions.”

This summer, he will be performing as part of ‘Stockhausen – a festival of LIGHT’; a celebration of the work of pioneering but controversial German composer Karlheinz Stockhausen, which will culminate in Birmingham Opera Company’s world premiere of Mittwoch aus Licht. Jack’s piece, Der kleiner Harlekin, will involve him playing solo, in costume, dancing as he plays. Stockhausen’s music is rarely performed, due to its complex nature and difficulties in staging, but Jack said he was very much looking forward to the challenge of doing something different, including spending time in Germany to learn more about Stockhausen’s work.

“Karlheinz Stockhausen was a very interesting composer who wrote a lot of crazy music – he got really into using new technology but he also had the idea of creating more flexible musicians who might act, dance and sing as part of the performance, while he also used the stage to create a spatial representation of the sound he was looking to create. Der kleiner Harlekinis a piece that’s not often performed because it’s complicated to put on and needs a lot of rehearsal but it is a real challenge and I’ve always been a big fan of theatre as well as music so I’m really looking forward to getting involved in this type of performance. I’m going to Dresden to prepare where I will work alongside some of Stockhausen’s contemporaries, which is a fantastic opportunity for me to learn almost from source.”