University’s Alumni of the Year award is a sound choice 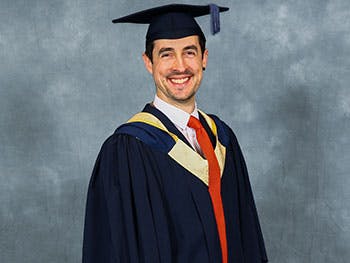 A sound designer, engineer and composer who has worked on award-winning independent films and Superbowl adverts as well as acted as an industry mentor for students has been recognised as Alumnus of the Year by Birmingham City University (BCU).

Lawrence Kendrick, a 2010 first-class honours graduate in Sound Engineering and Production and now Creative Director at London sound design team Strings and Tins, has produced music, design, mixing and sound effects for a myriad of clients. This includes global brands Amazon Alexa and Audible, as well as a wide range of independent music and film projects.

In his capacity as an Industrial Mentor for BCU, Kendrick has shared his experience and passion for his craft with students and staff on the same course via online forums, guest lectures and site visits to the award-winning String and Tins base in Soho, London.

He said: “I still look back fondly on my time since graduating in 2010. Itching to do something creative since tackling sciences at college, my lecturers had a genuinely infectious passion for creativity in audio which has stayed with me to this day.

“To those graduating this year, creative careers can of course be competitive and feel overwhelmingly intimidating as you get started. Use whatever connections you can to get your foot in the door, be someone people want to spend time with at work every day, keep learning and you’ll keep progressing through your new journey.

“Over 10 years later I’m still learning every week to stay creative and keep up with the times.”

Sound designed by Kendrick has been awarded at British Arrows, Kinsale Sharks and recently won gold for sound design at Ciclope Festival 2022, amongst others. His work can be heard across a range of media, including in the Emmy-winning Rising Phoenix documentary, the 2020 Amazon Alexa Superbowl commercial and the award-winning Mermaid School audiobook series for Audible.

Associate Professor and Head of the Department of Digital Media and Technology Dr Roy Priest said: “During his studies with us, Lawrence’s creative flair was evident in the work that he delivered around the application of music and sound for visual media. This aspect of the course fired his imagination and was the catalyst for his highly successful career.

“Since 2014, Lawrence has been a highly valued Industrial Mentor, inspiring many of our students to pursue this career path and offering his advice for developing portfolios, pursuing internships and enhancing technical skills.”

Earlier this year Kendrick released his own original orchestral composition on the Stills 02 EP. Current and recent projects for the sound designer and composer include unspoken  for new Audible projects, a second Superbowl commercial to air later this year and an indie film called Claudio's Song which was shown at Sundance Film Festival in 2022.

Kendrick, however, still sees the role of the audio professional as integral to driving innovation in the field, saying: “A sound designer's job is to facilitate storytelling, which often means not being distracting. That can mean sticking to expectations, but I love seeing people break those in the name of exploring creativity while still focussing on storytelling.”