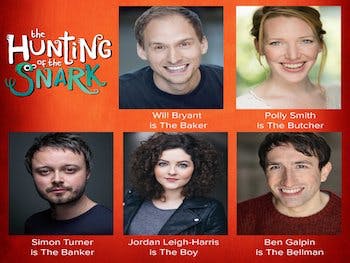 Four Birmingham School of Acting alumni are taking their current production of Snark the Musical to the West End and on tour.

Gemma Colclough, who graduated in 2005, is director and co-creator of the adaptation. 2002 graduate, Gareth Cooper, is music and lyrics and musical director. And the two stars are Polly Smith (2005) and Simon Turner (2002).

The production, which includes a life-like puppet, is a new musical adaptation of the Lewis Carroll poem, The Hunting of the Snark, and opens at the Vaudeville on July 26 for five weeks before going out on a UK tour.

Gemma said: “It’s been great to watch each other develop and grow together.  There’s a shared heritage of training for us which binds us. Essentially, we work together successfully because we share the same creative vocabulary, the same wish to see the show succeed, and most importantly, the same sense of humour.”

The production has been shaped and defined since 2013. “We started out with a scratch night at the end of 2013, then took a work-in-progress to Latitude Festival in 2014, which went really well,” said Gareth

The company, Alice House Theatre, which was founded and run by Gemma, commissioned the show in 2013 and then took it round to a selection of festivals. In 2015, the production went off to Edinburgh where it was a five-star sell-out. It was then subsequently produced and funded by RGM Productions who are the producers behind Priscilla, Queen of the Desert.

“We launched a large-scale version at the Sherman Theatre, Cardiff, last year and now we head to the West End and tour,” said Gemma

Gareth said: “We've been in touch since drama school and Gemma directed me in a rehearsed reading of Henry VI Part I at the site of the Rose Theatre, Southbank. A few years after that, I was writing and performing comedy in a sketch group called Delete the Banjax, and we tended to do quite a lot of fun, upbeat comedy numbers. So when Gemma began putting together a team to write the show, she asked if I'd be interested in writing a few comedy songs for it. I think we started with three and it's now built up to eight, plus instrumental pieces too.”

In Birmingham School of Acting there is a huge cross-year interaction between students, with first and final years working together on productions. So it is no surprise that once they fly the nest at BSA they team up in the future for projects and productions.

Gareth said: “From my perspective, when graduating, the main thing I did was to get as much experience as possible – apply for fringe, do the Edinburgh Fringe, which is amazing, do student films, get a showreel, do rehearsed readings, email people, apply for loads of stuff, see shows ... And if you find it difficult to get work, make your own - it took me ages to realise this, but the stuff that's given me the most success has been things I've done myself, such as writing, stand-up and musical comedy.”

And Gemma advises: “Create your own work, find people you love working with and keep doing that – your success becomes a shared interest you pull together. Also, from a personal point of view, find something you can do alongside your performance career.  I spent the first four years of Snark not being paid, and actually paying other creatives to work on the project – I could only do that by having a second stream of work freelancing that helped me do all that.  Being an artist is a culmination of everything you do in your life, so make it work for you.”

You can find all the dates for both the West End and tour via the company’s website.