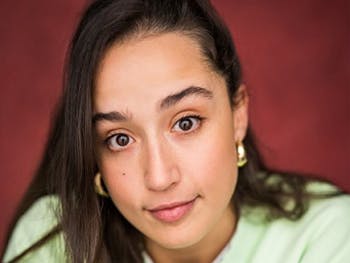 A Royal Birmingham Conservatoire alumna has landed a key role in the third season of hit Netflix series, Haunted, due to premiere in May 2021.

Emily Drewett enrolled at BCU to complete a Foundation year in Acting and later joined the BA (Hons) Acting course at the Birmingham School of Acting, part of Royal Birmingham Conservatoire, before graduating in 2020.

The graduate is now preparing to watch herself in her first major TV role, starring as Alicia in the upcoming third series of the horror-themed show.

“I play a girl called Alicia, and I re-created her story and paranormal experience. The real Alicia is in the programme reflecting on her experience of what happened when she moved house as a young girl, and I’m playing her younger self. Viewers can expect to see some real gruesome stuff, but it will keep them on the edge of their seats.”

It is the first major role that Emily has landed since graduating in 2020. She said: “I had the audition just weeks after graduating, and within two days of finding out that I’d been offered the role, I was on a plane to Prague to film. It all happened so quickly.

“In the series, there isn’t a huge amount of dialogue and it is mostly improv. During my audition, the director gave me a scenario and I just had to act it and go with it. It was my first face to face TV audition, so it was slightly overwhelming as they were asking me to do some crazy stuff and of course, none of it is there as you’re just pretending!

“I was so convinced that I hadn’t got the role, so I was shocked when my agent called me to tell me that I’d got it and that I was off to Prague to film.

“I spent half the time on set thinking ‘how has this happened to me’, especially during Covid-19. But getting used to a production like that was so interesting, seeing how there was a role that every single person had and even having my hair and make-up touched up in between scenes was fun.”

Emily, from Worcestershire and now living in Edgbaston, wasn’t always sure that university was for her, but when she discovered that she could study Acting on her doorstep, she soon found herself auditioning: “People always told me that when you audition, you will walk in a place and just know if it’s for you and if you can see yourself studying there. The experience of the audition day at BCU was just the nicest atmosphere, everyone was so welcoming, there was no judgement and there was a real sense of being part of a team.

“When I started at BCU, I remember thinking that if I leave feeling more confident and self-assured than I did when I started, then I’ll be happy. I feel that now I am a well-rounded actress and that anyone could throw a role at me, and I wouldn’t hesitate to give it a go. At RBC, you are taught in lots of different avenues, so you are ready to take on anything.”

Emily, who is also now filming for a BBC series, has high hopes for the future: “I thought I would cringe at myself on TV, but when I saw the trailer, I got so excited. My friends and family are really looking forward to watching too.

“In the future, I’d love to be in a period drama that really takes you out of the now. Different eras, accents, outfits, the lot! But I’d also love to get involved with more theatre and coming-of-age pieces.”

The upcoming third series of ‘Haunted’ on Netflix premieres globally on Friday 14 May.