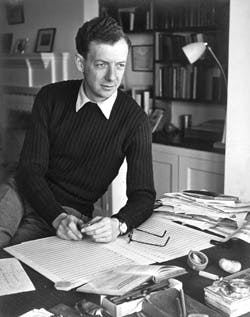 Birmingham Conservatoire will perform the world première of a work by Benjamin Britten – almost 90 years after it first written when the great composer was a schoolboy.

The first ever performance of Chaos and Cosmos - a symphonic tone-poem composed by Britten when aged 13 - will be played in the Town Hall tomorrow evening (21 June) as part of special performance in Birmingham.

Birmingham Conservatoire students, part of Birmingham City University, are honoured to be the first to play this rare and fascinating musical piece live. The performance marks the finale of the Conservatoire’s successful five-day festival celebrating British composers.

“It’ll be fascinating to hear this schoolboy piece of Britten’s, a work which he was apparently fond of and often referred to later in life,” said Michael Harris, Senior Woodwind Tutor at Birmingham Conservatoire.

Chaos and Cosmos was offered as thanks to the Conservatoire by the Britten-Pears Foundation for their contribution to the online Britten Thematic Catalogue Project and is taking place in the centenary year of Britten’s birth.

Dr Lucy Walker, director of learning and development at the Britten-Pears Foundation, said Britten gave the original manuscript score to his parents for their 26th wedding anniversary in 1927.

“It was a complete score rather than a series of sketches. Britten seems to have written it straight out - and the typeset score we have made is a direct copy,” added Dr Walker.

The work will be performed by the Birmingham Conservatoire Symphony Orchestra and Chorus in a programme that will also include music from Delius and Tippett.

Over 60 individuals from Birmingham Conservatoire will be performing with orchestras, choirs and guest artists as they showcase songs, piano pieces and orchestral works, including a performance of Delius’ masterpiece, Sea Drift.

As well as the live performances students from Birmingham Conservatoire have been recording extracts of Britten's childhood orchestral works that have never been heard before.

These recordings are for the Britten Thematic Catalogue project and include some highly ambitious orchestral pieces written between 1926 and 1927, when Britten was around 12-14, with several scored for huge orchestra.

Get more information abour the premiere of Chaos and Cosmos.

The five-day festival running from 17 – 21 June will be one of the biggest Birmingham Conservatoire has ever hosted and includes 15 concert programmes celebrating the works of John Ireland and Frederick Delius.