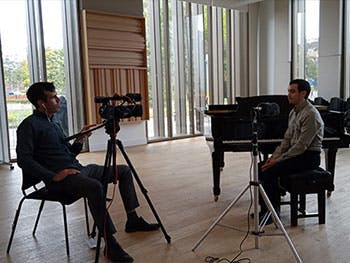 First-year BMus (Hons) Composition student Vinicius Motta, also known as Vini, appeared on BBC Midlands Today at 6.30pm on Friday 25 September to talk about his disability, his place at RBC, and to encourage people to donate to his fees.

Vini and his family moved to the UK from Sao Paolo State, Brazil, three years ago for a better quality of life for Vini.  The talented musician is visually impaired and attended the Priestley Smith Specialist School in Great Barr, Birmingham, under the tutelage of music teacher John McGonagle, prior to being offered a place at RBC.

Twenty-year-old Vini is studying in his first year at RBC. However, as he has only be resident in the UK for three years and not yet achieved settled status, he is required to pay full international fees of £20,300, which his parents are unable to afford.

Vini said: “When I perform and compose, I put my heart into it. I want to influence and be influenced here at Royal Birmingham Conservatoire, making friends and achieving my dreams. It’s important for me to show that disability is not a barrier to achieving your dreams."

You can donate by contacting Director of Development Robin Leonard.