Academics to present Commonwealth Games commission on homophobia in sport 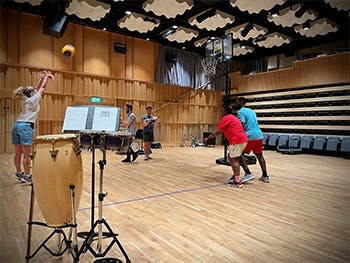 Amaechi draws on the attributes of 3X3 basketball – an exciting, fast-paced, inclusive and democratising sport that demonstrates skill, teamwork and quick-thinking strategy.

Three Birmingham basketball players, three percussionists and an electronic musician run, jump, shuffle, bounce and play across the 3X3 practice court of the Commonwealth Games, creating an energetic and sonically rich performance that sits in the space between sport and music.

This action is frequently interspersed by three singers quoting in close harmony the inspiring words of British business psychologist and former NBA player John Amaechi, the first professional basketball player to come out as gay in the very straight world of sports.

There are 35 Commonwealth countries where homosexuality is illegal (of which 13 countries punish homosexual acts with imprisonment or death penalty). Also, while there is an increasing support in the sports world for gay athletes, many sports people internationally still live in fear of expressing their sexuality, whether they live in a country where they are allowed to openly live their homosexual lifestyle or not.

The 15-minute piece will take place on the practice court at Smithfield Festival site on Saturday 30 and Sunday 31 July at 6.20pm and 10pm.