A new conservatoire for Birmingham 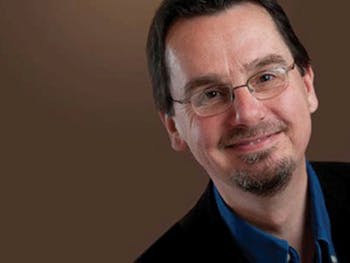 We were recently delighted to publish designs for the ambitious new £40m+ home of Birmingham Conservatoire, set to open in 2017.

As with many new building designs, the concepts were subject to a healthy debate online, via our Facebook page.

So, we thought we'd continue the debate here, starting with a guest blog post from Dean of our Faculty and classical music enthusiast, Professor David Roberts (pictured right):

A new conservatoire for Birmingham

A conservatoire is a special kind of building. It's a place for teaching and a place for performing. It must contain sound and project it, with walls of a certain thickness to keep sound in, and concert spaces of a certain height to let sound bloom.

It requires space to store instruments and space to move them around. Above all, it invites audiences to listen to performances crafted by hours of solitary practice they never see.

Our new Birmingham Conservatoire has been designed by the leading architects Feilden Clegg Bradley, who have won more RIBA awards than any other UK practice. Tom Jarman, FCB’s project lead, has expressed the Conservatoire’s dual nature brilliantly in his design, which combines freely flowing open spaces with the quiet recesses which great musicianship needs.

Designed from the inside out

You can’t build a conservatoire out of glass and steel. It can’t look like an airport lounge or the latest shopping mall. It needs the balance of repose and excitement Tom has devised.

In fact, you could argue that all performance venues should look a little subdued. Too much time and money spent on exterior thrills often leads to functional and acoustic failure: ask anyone who has performed at the Sydney Opera House or London’s National Theatre. The really great venues are designed from the inside out.

Our new site is an inspired choice. Are we losing something by re-locating from Paradise Circus and the city’s cultural crown jewels? I don’t think so.

Think for a moment about the state of classical music today. On the one hand, a world exploding with e-technology and e-opportunity; on the other, a live audience with an average age of 70 and upwards.

The new Birmingham Conservatoire will be built next to the most advanced set of media facilities available to any in the world: digitally connected to the Parkside suite, with endless opportunities for students to translate musical into marketable expertise.

In the midst of a massive student population drawn from Aston, Ormiston Academy and Birmingham Metropolitan College, not mention its own Birmingham City University, our Conservatoire will have an unrivalled capacity to inspire new generations to open their ears to the glories of classical music, jazz, and a whole range of other forms.

And then there’s HS2. The new terminus will be built about 200 metres away: new Conservatoire, new front door to Birmingham. That is perhaps the biggest excitement of all – a statement of confidence that we have connections and cultural capital fit to stand by the best.

It’s an extraordinary privilege for me, as Dean of Faculty, to be involved in this great project. I am convinced that future ages will see it as a landmark in our city’s proud regeneration.

The first conservatoire of the digital age, this new building will, like Symphony Hall and the new Library of Birmingham, force the world to sit up and take note.