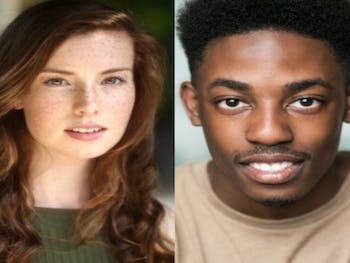 “I feel so incredibly grateful and excited to go straight into employment, as I know it doesn't always happen to graduates straight after leaving drama school. My aim is to continuously be in work, so hopefully this is just the start of many future jobs,” says Khalid

I feel very lucky to get to go straight into an acting job it's definitely a nice position to be in. Especially as it's a Shakespeare and I've always wanted to be a classical actor and take on these roles, so to do it with such a great company is very exciting. We also get the chance to work with actors who have been a part of Shakespeare plays since before we were born so we're constantly learning new things every day which is just invaluable.”

In the production Niamh will be playing the challenging role of Ophelia, while Khalid will be Guildenstern.

Niamh explains: “Ophelia is a really interesting Shakespeare character. She's got a lot of love and respect for her father and brother which is seen from early on in the play. She's also starting to become a young woman and is finding herself falling in love with Hamlet.

“Although she is very obedient she has an inner desire for adventure and romance and finds herself in a tricky situation of being in love with someone who is a prince and way above her in rank and position. In the end she does die tragically but I think it's very important to not play her as a tragic character but as a young woman who loves deeply and who is incredibly loyal.”

Guildenstern is part of the double-act of Rosencrantz & Guildenstern who are Hamlet's old friends who he hasn’t seen in nearly a decade, but who are called for by the king and queen to find out why he's behaving bizarrely.

Khalid says: “I'd say Guildenstern is quite two-faced. He wants to be very pleasing towards the king and queen, so that he will be rewarded, but it means having a lack of loyalty in friendship towards Hamlet - which he's willing to do.”

Both Khalid and Niamh were brought in for an audition by the casting director Suzy Catliff. Suzy is no stranger to BSA, as she has worked with the students before in various workshops. The audition itself was in front of director Rob Forknall.

The tour will be on June 30 to August 13. Visit the website for all the dates and venues.