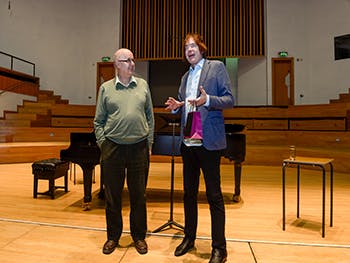 Tim Walton’s 1,000th show was an afternoon piano concert on Thursday 26 February featuring performances by Conservatoire students and staff as part of the institute’s Schubert Festival – honouring the work and legacy of the great Austrian composer.

Moseley-born Tim has been able to verify his record as he keeps a programme from every concert he attends, with his private collection boasting some 6,000 documents from performances he has been to around the UK.

Tim’s records are stored in a walk-in cupboard in his Edgbaston home, although he now registers concerts electronically to ensure they are more accessible.

It took me nearly 25 years to get to my 500th Conservatoire concert, as I was working full time and didn’t live in Birmingham. Now I am retired I try to come as often as I can and the Conservatoire has really become a second home to me.
Tim Walton

“I love hearing performances of all kinds, but the Conservatoire’s Piano and Strings Departments, in particular, are sounding better than I’ve ever heard them before at present.

“The Conservatoire is very unique in hosting performances of music not normally heard elsewhere, including lesser-known composers and offering an eclectic mix of genres.

“I especially like being able to follow the progress of students during their time here, seeing them grow as musicians throughout their education.”

Tim, who lists Beethoven, Mahler and Tchaikovsky among his favourite composers, has strong family connections to Birmingham Conservatoire also. His mother, an amateur violinist, volunteered as a teacher at the School of Music during World War Two and played with students as part of the string orchestra.

The School of Music – renamed Birmingham Conservatoire in 1989 – is today part of Birmingham City University and is one of the leading music academies in the country.

“As well as being one of the premier locations to study music in the country, Birmingham Conservatoire offers a diverse public programme of performances, from internationally-renowned musicians to our own talented students.

“Tim is a familiar and welcome personality among the students, staff and regular concertgoers and I feel privileged in being able to congratulate him on this impressive accolade. We look forward to welcoming Tim back for his next 1,000 concerts.”

Later this year, the current Conservatoire building closes and migrates to its new £56 million home in the Eastside region of the City, which is due to open in 2017.

“The Conservatoire’s Adrian Boult Hall is an exceptional performance venue and I have become rather attached to it. Indeed, I will miss it, but the new Conservatoire looks incredible and the facilities available to students will be second to none.”

Although he is keeping tight-lipped on his favourite Conservatoire concert, he is very fond of the competitions and masterclasses that are held at the institution.

He also looks back with great pride at being able to perform with first year students in the late 1980s and early 1990s, and in particular singing in the choir for a performance of Verdi’s ‘Requiem’ in 1992.